Antique Arms and Armour from all over the world

Hermann Historica, International Auctions, is opening its autumn season at its new location, with an extended programme 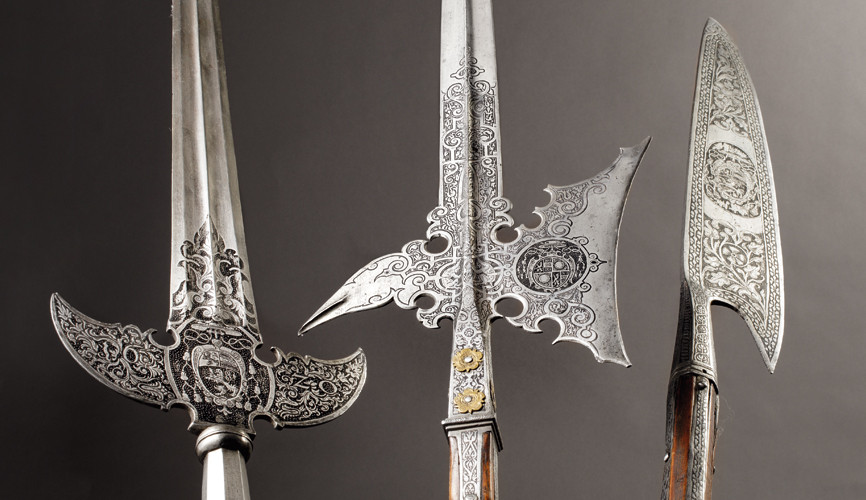 Collectors on the lookout for rare, outstanding and unique objects from antiquity to the modern era in the field of "Antique arms and armour from all over the world" are eagerly awaiting news of the wide range of objects offered by Hermann Historica. Despite the complex and time-consuming relocation to the new, spacious premises in Grasbrunn near Munich, the team of experts have managed to fill the twelve (!) catalogues for the large Autumn Auction – the live auction from 11 to 20 November and the subsequent online-only auction on 21, 24 and 25 November 2019 – with an incredible cornucopia of collectible objects from every corner of the globe.

For the first time, in addition to the traditional catalogues for arms & armour, firearms, military history, contemporary history and special, collection-specific catalogues, this autumn will feature a separate catalogue for art and antiques that is second to none.

As usual, our in-house experts will be available to advise customers on all aspects of purchasing objects or consigning lots for auction. Bids may be submitted in traditional fashion in the saleroom, over the telephone or in writing; naturally, there is also an online option via PC, tablet or smartphone. Needless to say, all objects can be found on the major internet auction platforms: Invaluable, Lot-tissimo, The Salesroom and LiveAuctioneers. To save the fees charged by these platforms, simply register in advance on Hermann Historica's own online platform.

The sections for antique arms, antique firearms and armour from all over the world hold the usual diverse selection of exclusive lots in store. The edged weapons and suits of armour in the antique arms and armour section are especially superb, including some of the best halberds to come on the market in recent years.

Particularly worthy of mention here is an etched Augsburg halberd for the trabant guard of Emperor Maximilian II, dated 1571. The fine ornate etching with decorative tendrils on a stippled, blackened ground bears the Emperor's monogram, plus the double-headed eagle, with an escutcheon and collar, on both sides. Comparable specimens can be found in the collections of the calibre of the Philadelphia Museum of Art. Bids are now invited from 10,000 euros. No less spectacular are three lavishly embellished, 16th and 17th-century halberds, issued to the guards of the Prince Bishops of Salzburg. Once decommissioned, they took a circuitous route, ultimately ending up in the Bavarian Army Museum in Ingolstadt. During the interwar period, the acclaimed weapons expert Hans Schedelmann was able to acquire them from the museum for his private collection as part of an exchange. They are now offered for sale at extremely attractive starting prices of between 4,500 and 8,500 euros.

Also from Hans Schedelmann's collection is a miniature suit of jousting armour, modelled on a suit of Nuremberg armour, which was made by the eminent artisan smith Schneider of Munich in 1923. Standing just 27.5 centimetres tall, yet faithful to the original down to the finest detail, from the pivoted visor and articulated elements to the screw-mounted breastplate and backplate, this gem was wrought by a master of his craft and is expected to fetch 3,800 euros. 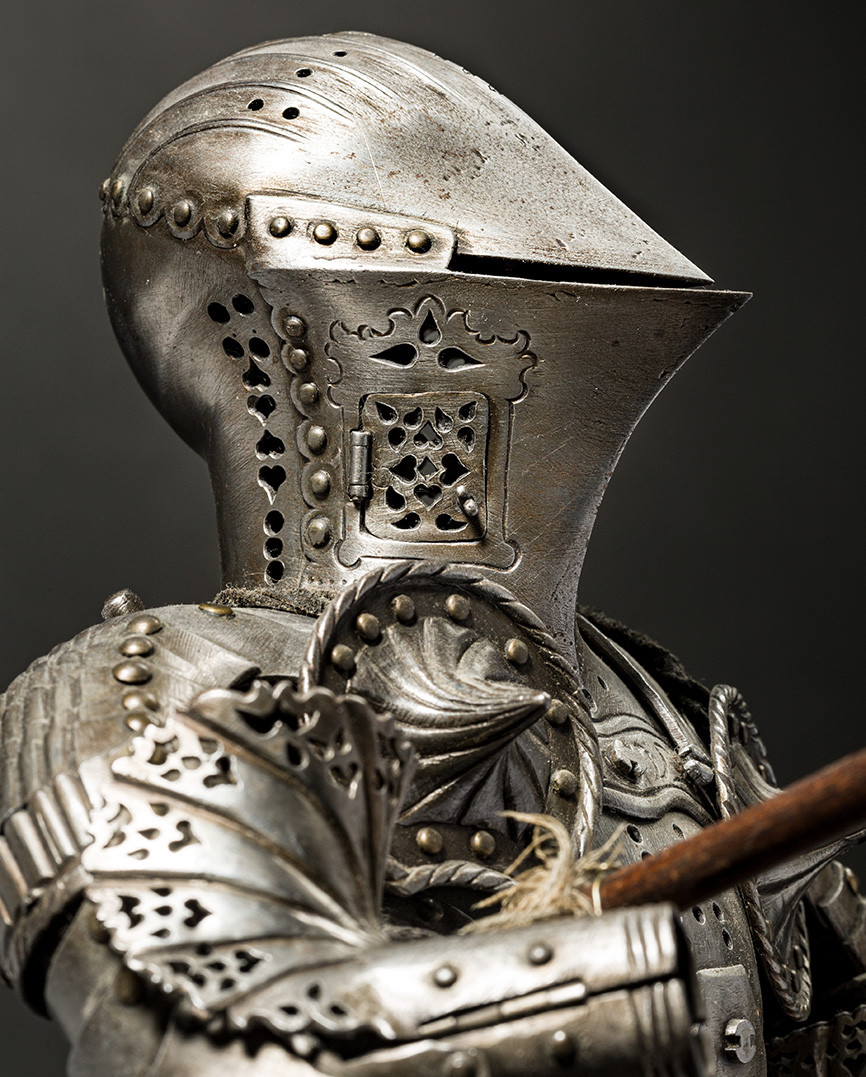 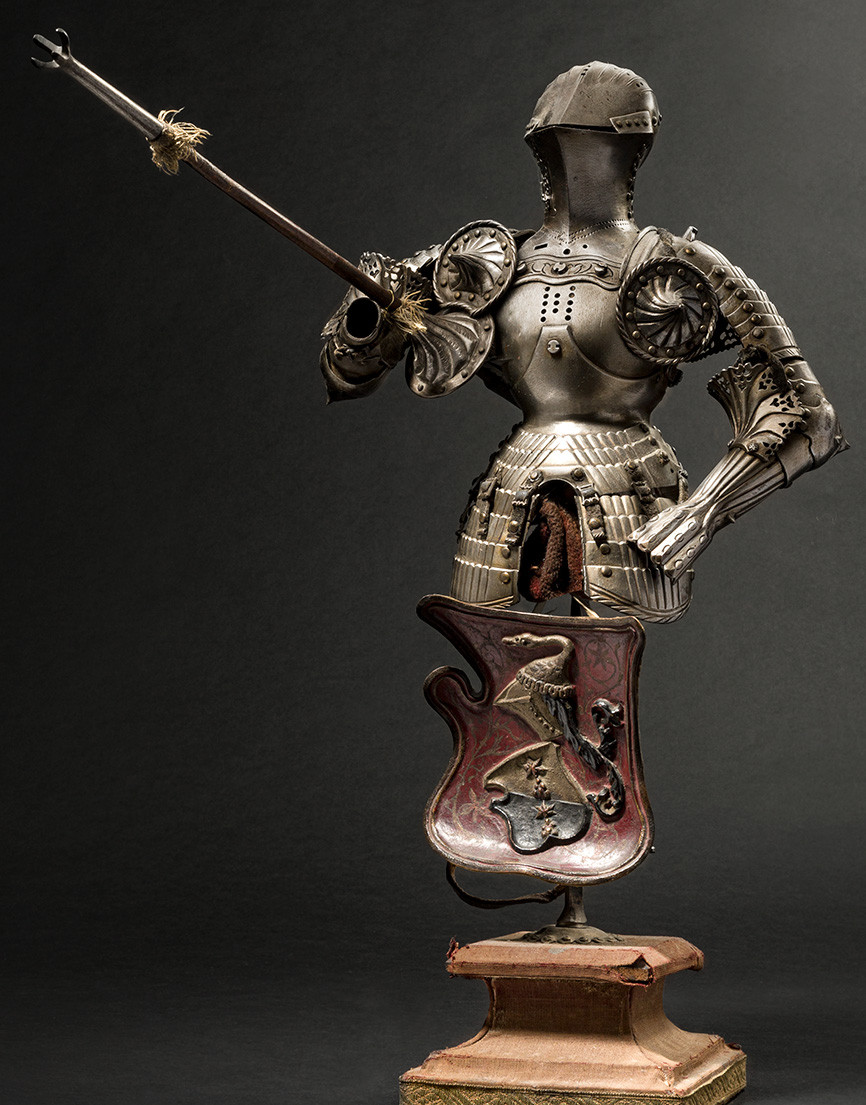 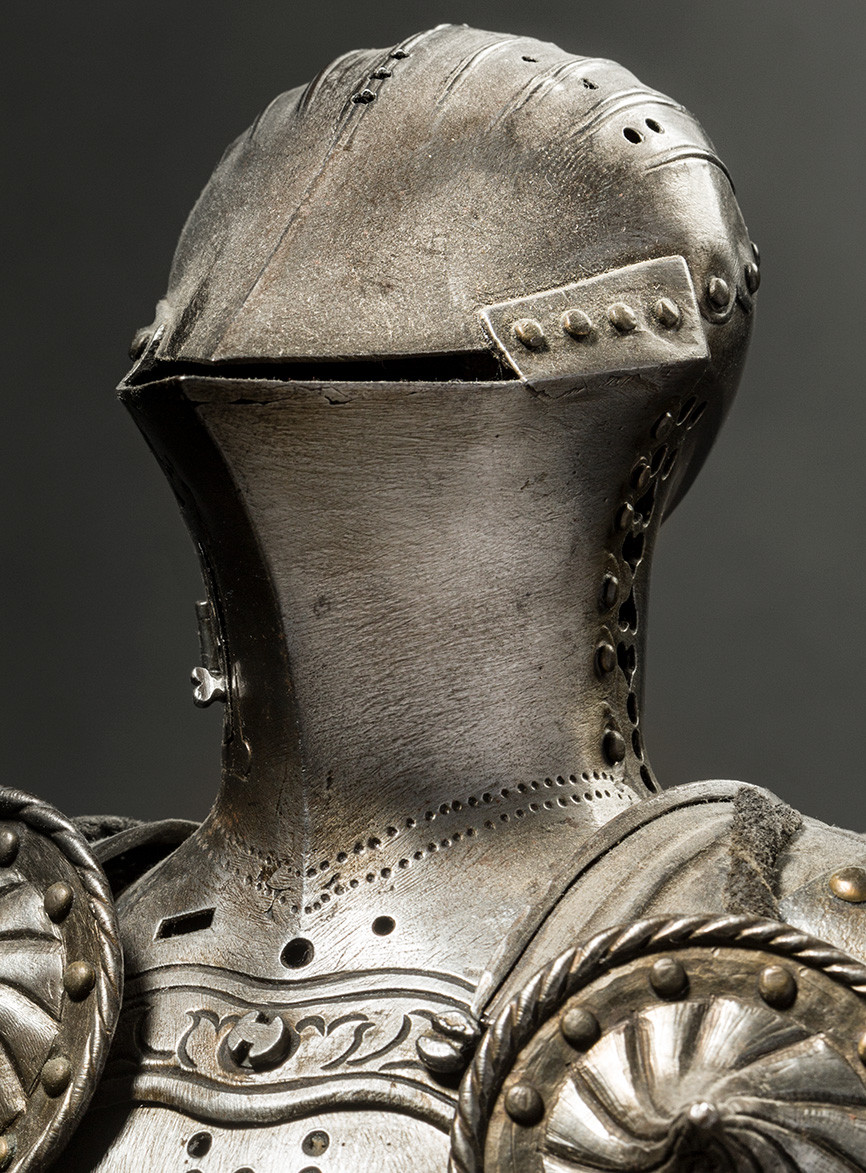 The life-size companion piece is a black and white cuirassier's armour from France, dating circa 1620, featuring a visor helmet and gorget, full arm defences with articulated pauldrons, rerebraces with couters and cuisses sliding on fourteen lames, a breastplate and a backplate, the latter with a shot strike mark. The fact that this suit of armour has survived completely in its original condition is particularly remarkable. Only the blackening and the leather lining have been renewed. Bids will be accepted from 30,000 euros for this exceptionally decorative set. 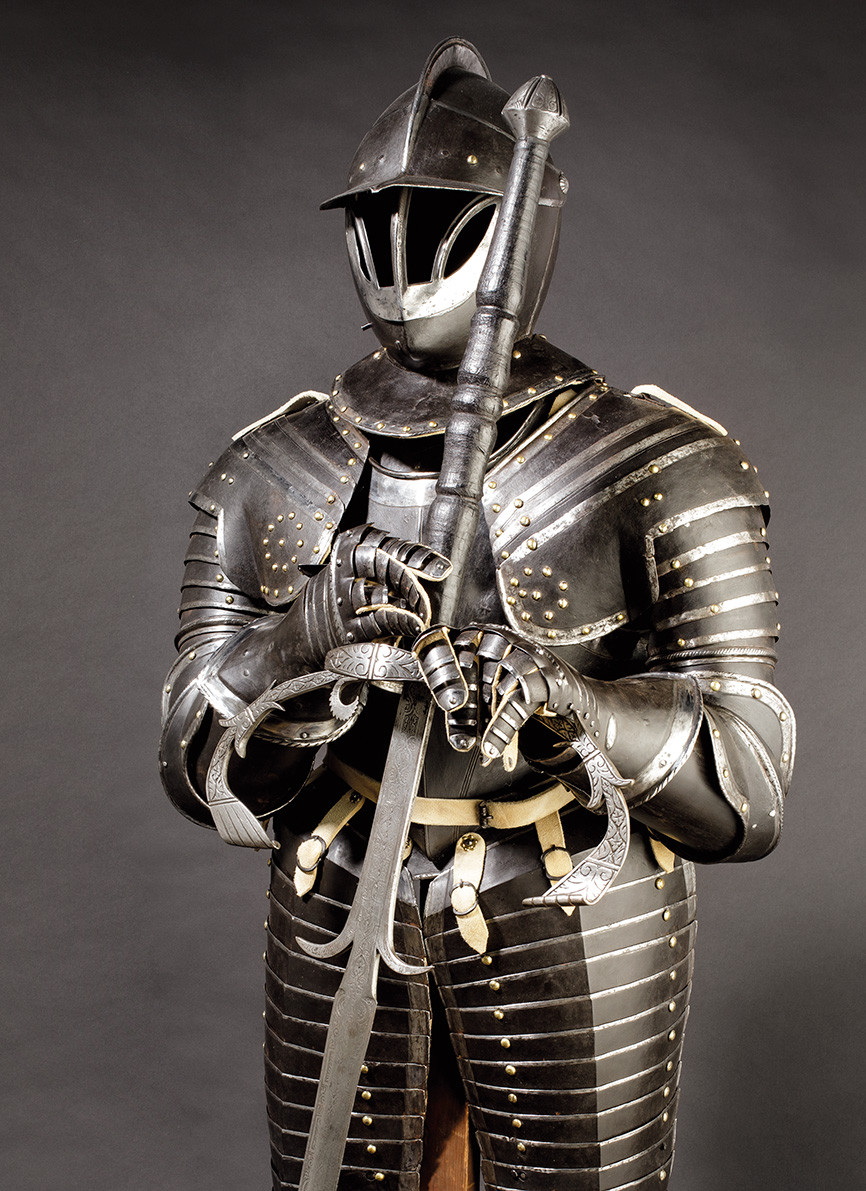 Slightly more recent, yet in equally fine, original condition and no less significant, is a Brunswick two-hand sword with an etched blade. Forged circa 1600 and measuring an imposing 173.5 centimetres, the blade of the superlative processional sword bears depictions of a heraldic eagle and lion, surmounted by a bird, with arabesques at the base. A minimum bid of 12,000 euros will secure this edged weapon, whose widely flaring grip in the characteristic Brunswick shape is lavishly adorned with ornamental engravings. Among the numerous Saxon rapiers on offer, an exquisite, silver-inlaid weapon from the same period commands attention. Made in Germany and elaborately finished, the iron knuckle-bow hilt entirely covered in ornamental silver inlays, the wooden grip embellished with silver corded wire and silver dots, the 130.5 cm showstopper is estimated at 19,000 euros. 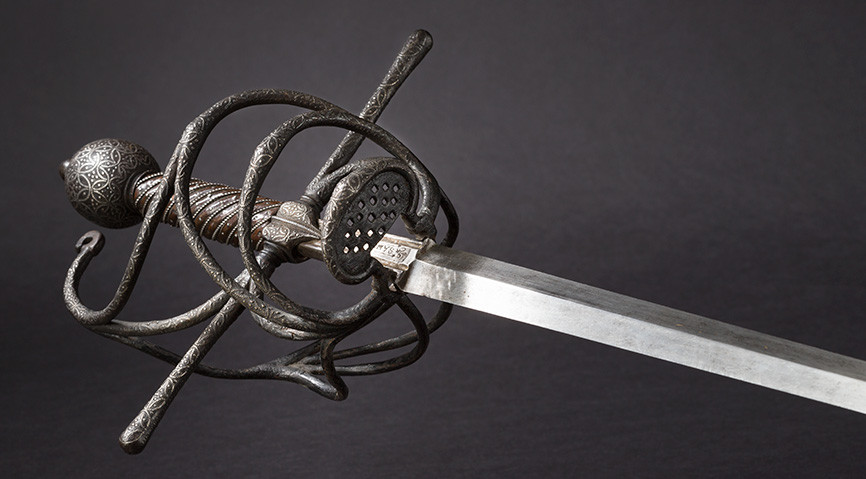 An unusually magnificent 1680 kilij from the Ottoman Empire is an enthusiast's dream come true. Hardly any sophisticated decoration technique was neglected in embellishing the kilij, which boasts gold-inlaid leafy vines, a script ornament and signatures. The florally nielloed quillons in silver, green nephrite grip scales with an engraved, gilt grip strap and garnets set in gold provide the final flourish. This impressive, sumptuous weapon is certain to exceed its guide price of 60,000 euros by far. 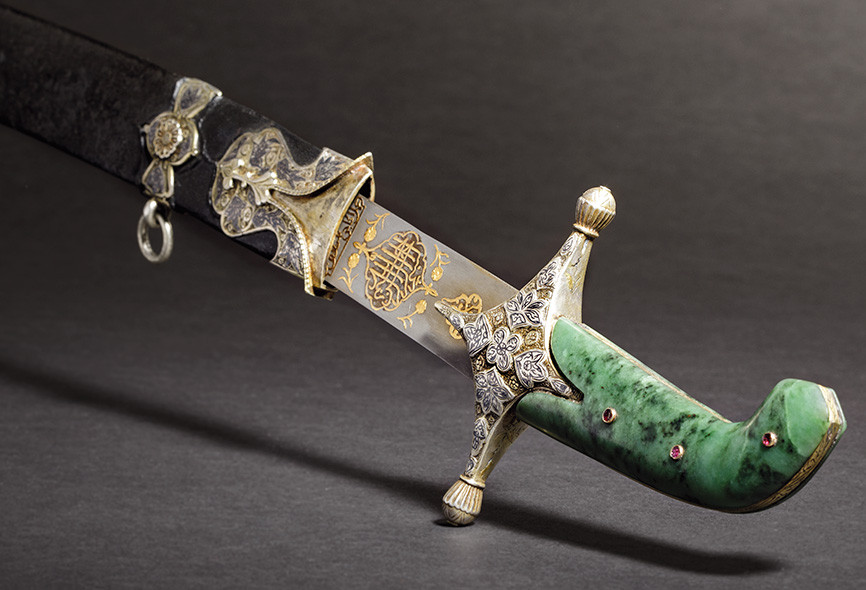 This autumn, Hermann Historica is delighted to present a collection of around 60 Japanese tsubas, mostly dating from the 19th century, which have been documented in a family estate for one hundred years. Moderately estimated, opening at between 100 and 1200 euros, this is a once-in-a-lifetime opportunity for connoisseurs who wish to extend their outstanding collection or for first-time buyers who are just starting out. These tsubas are true masterpieces, forged by the finest craftsmen in their field. Dated 1856, a mokkogata tsuba shows a gold-appliquéd crane landing on fully sculptured waves, while a katabami kungota tsuba from the Edo Period is sure to appeal with its three thoroughbred horses and three delicate flowers, all inlaid in gold. 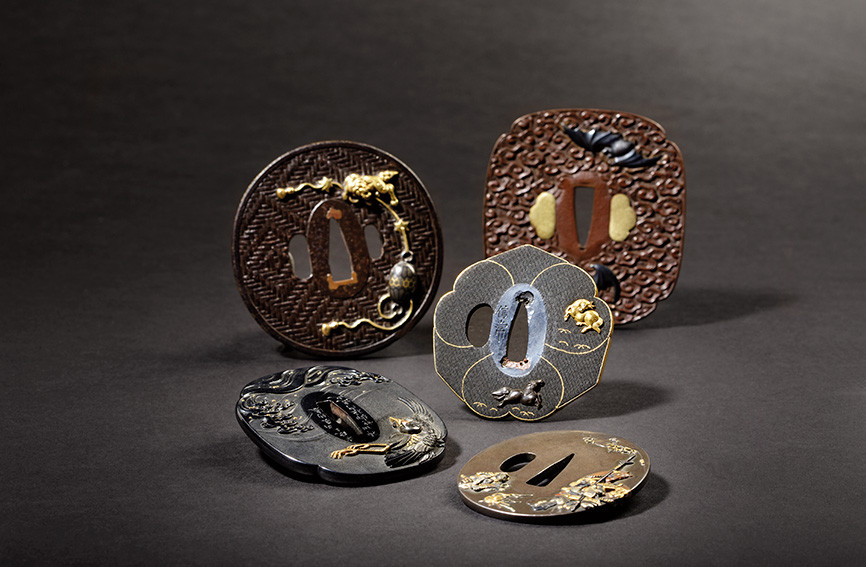 More detailed descriptions and numerous high-quality photographs of the objects will be published on the Hermann Historica website. www.hermann-historica.com 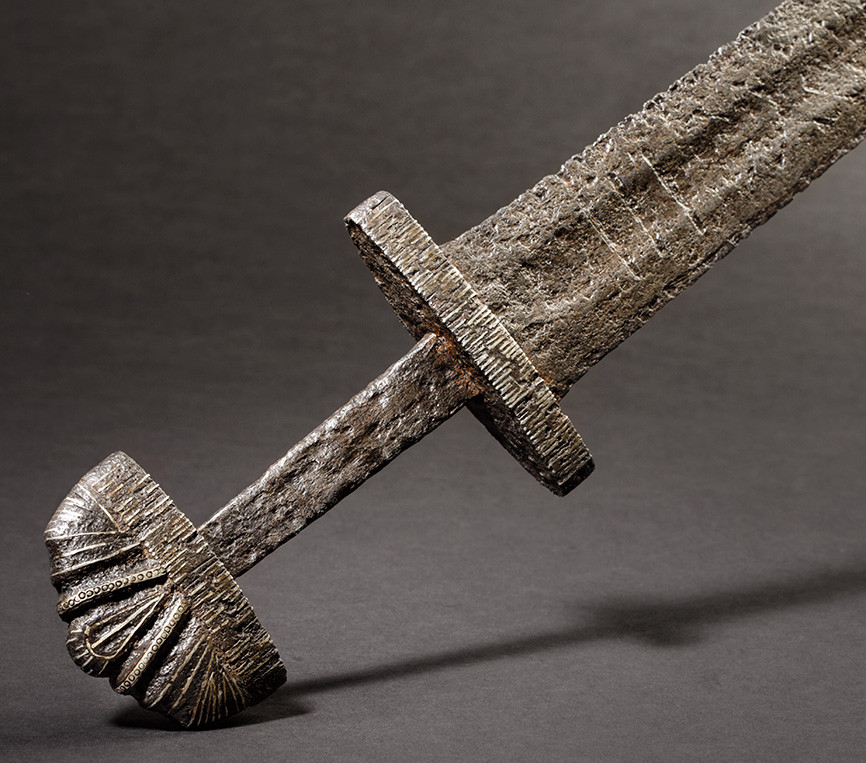 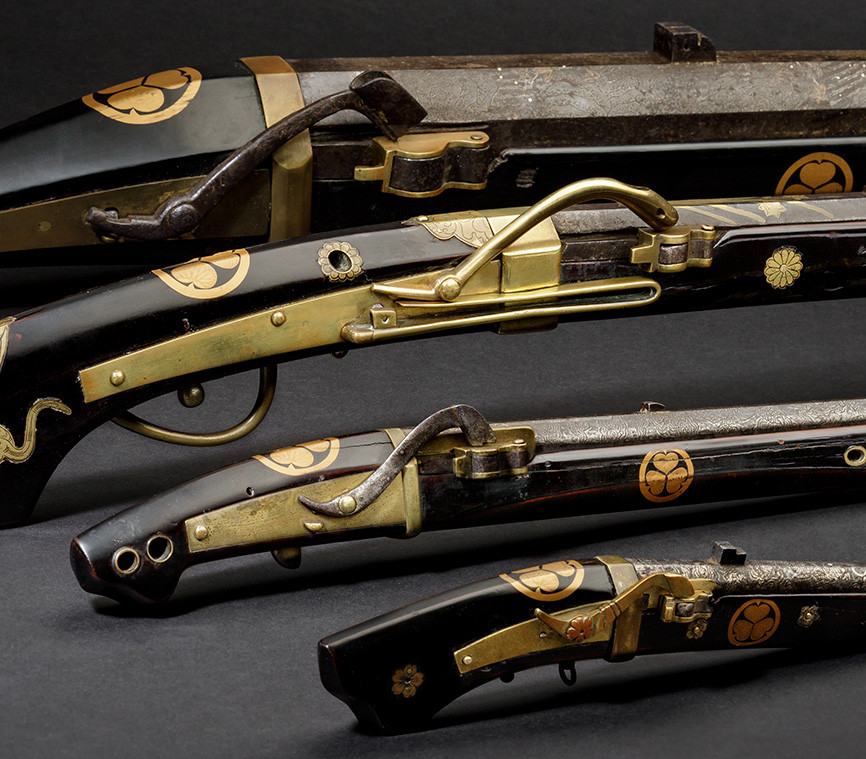 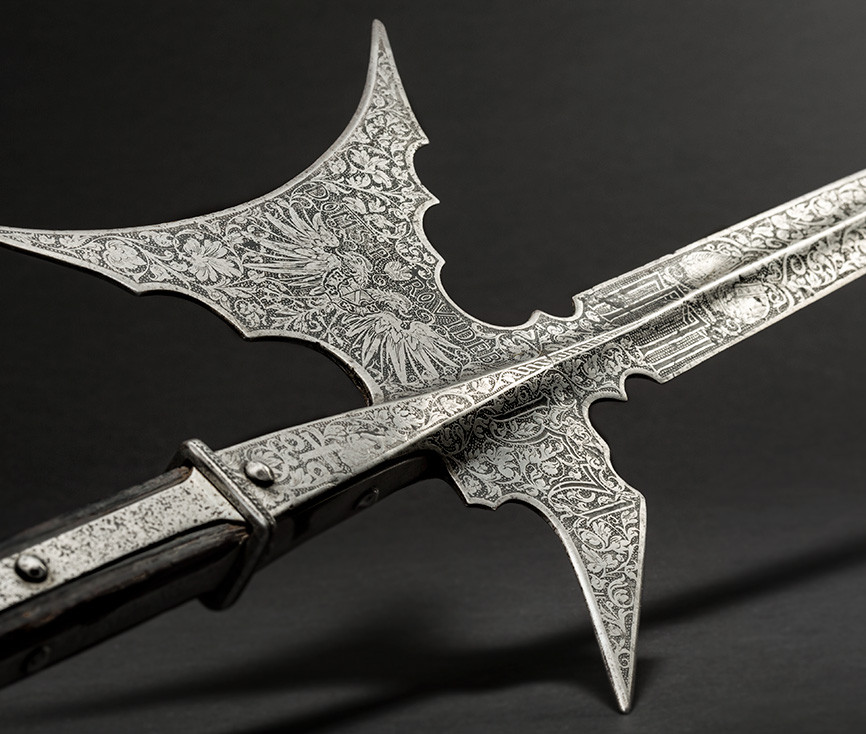 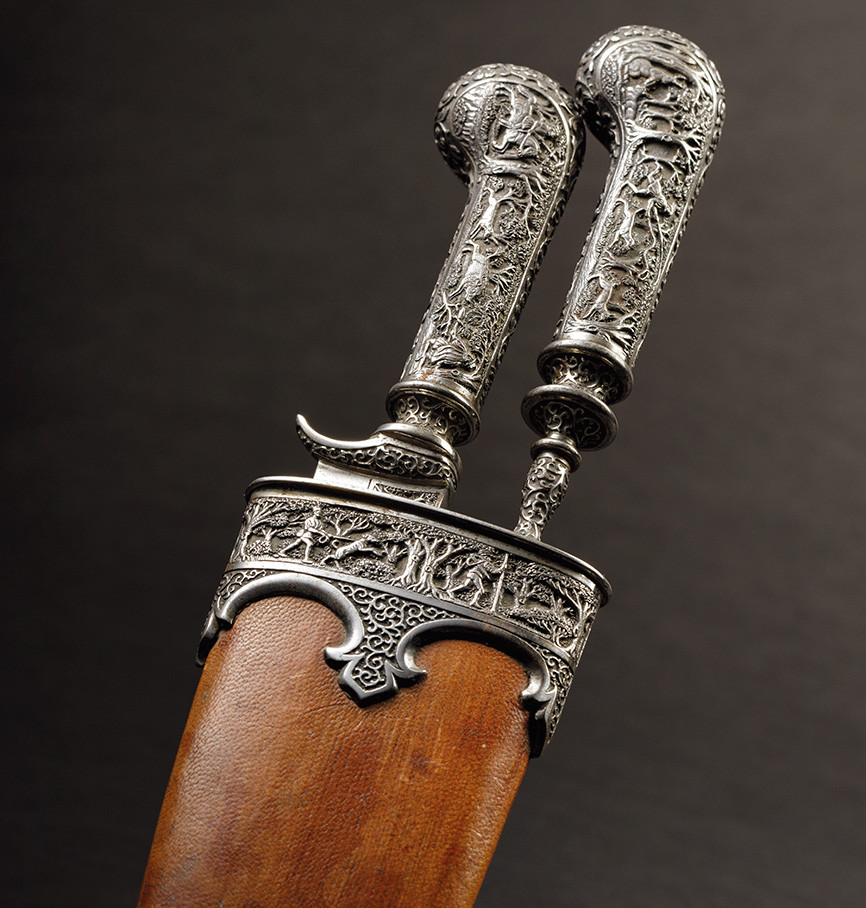 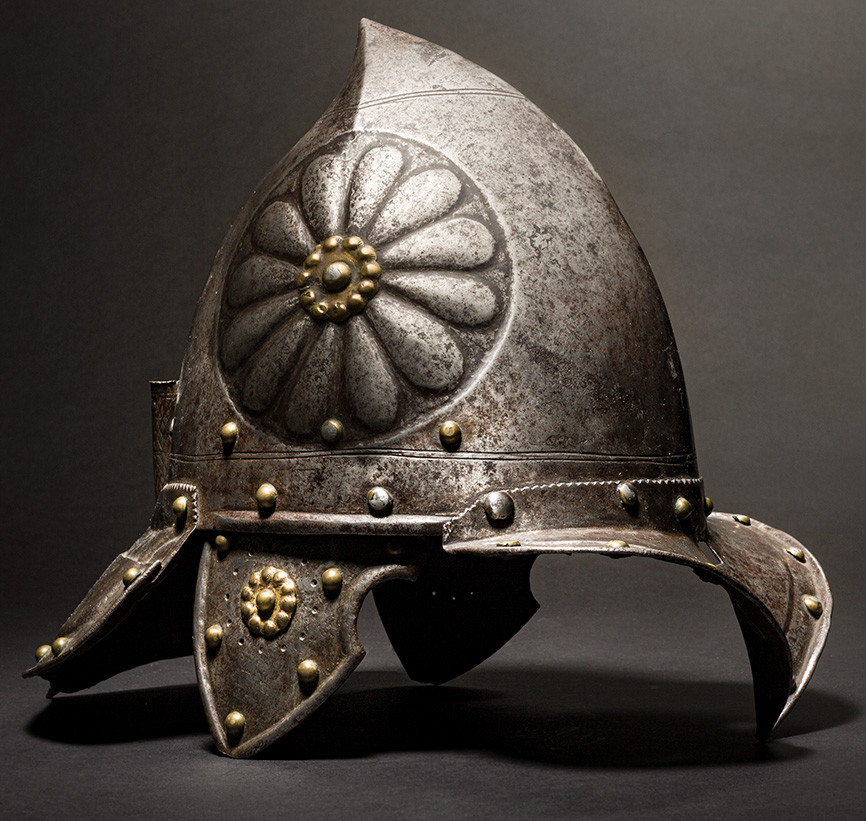 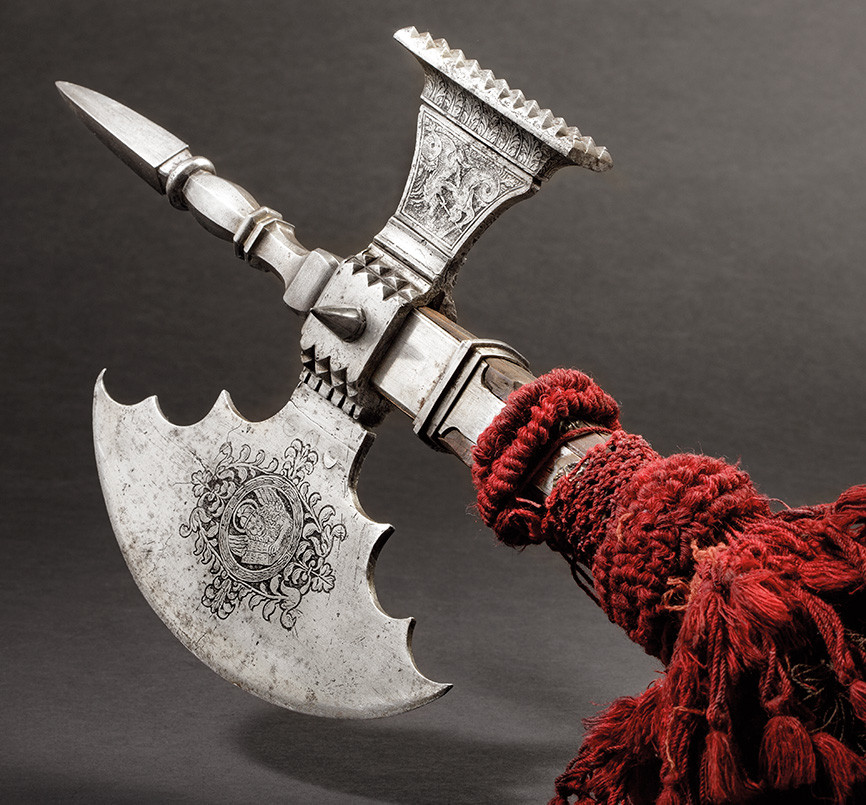 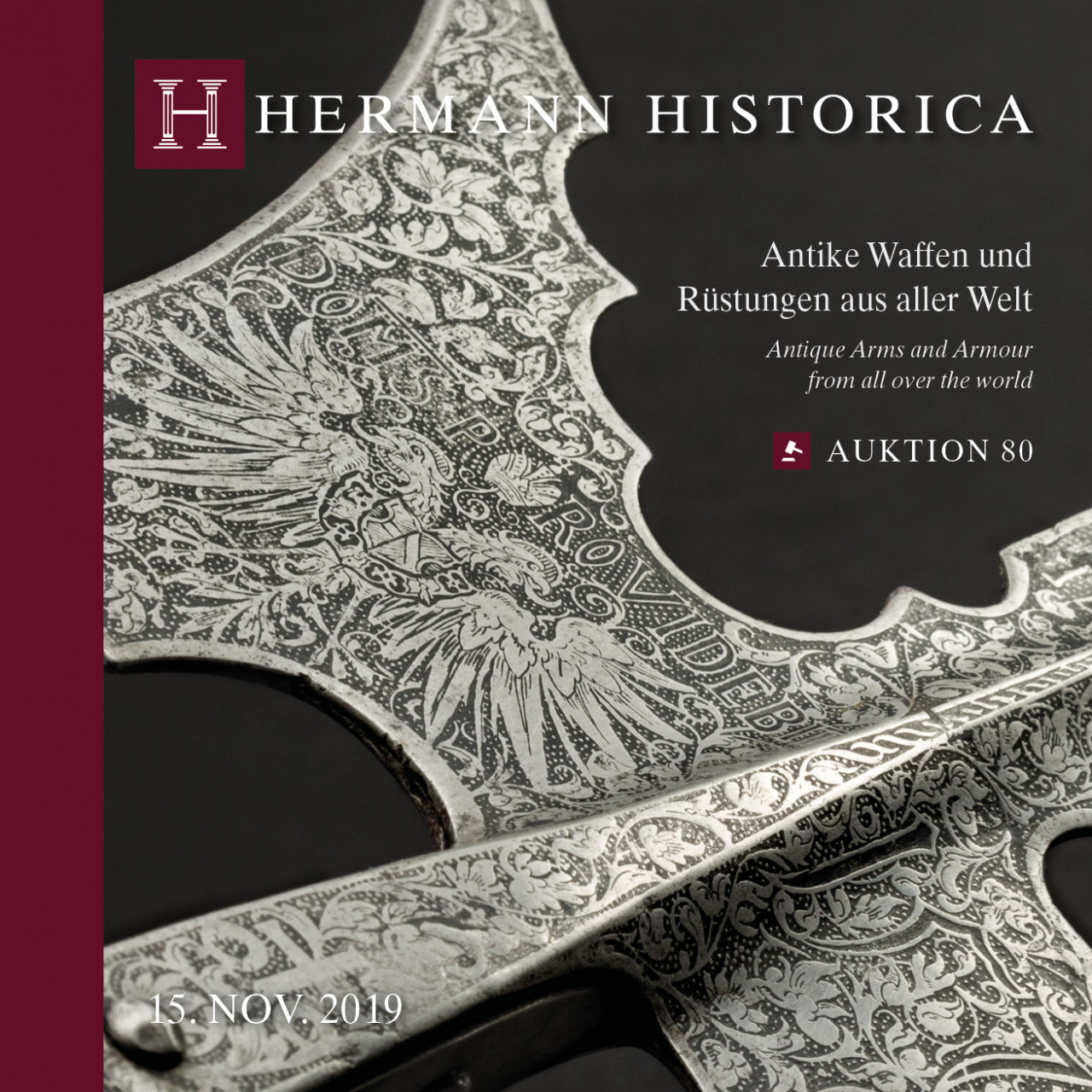 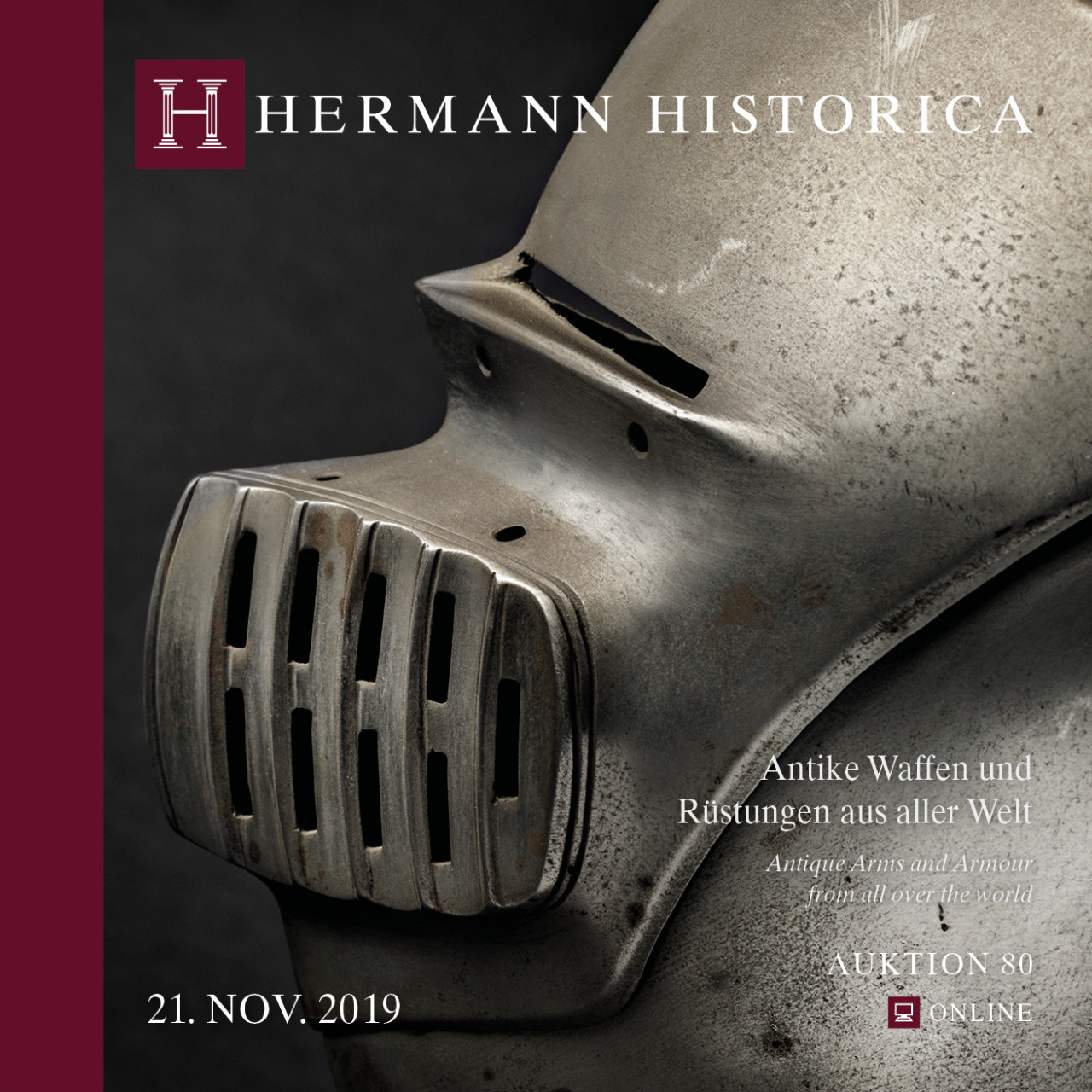 or by Email to:
marketing(at)hermann-historica.com