The first online-only auction of 2022 took place from 20 to 24 June. Over 3,300 objects were offered at the acclaimed Hermann Historica auction house. As usual, countless aficionados of art, firearms and military antiques gathered in front of their screens. Even the scorching summer temperatures could not halt the bidding onslaughts, although many collectors took short breaks to cool down with an ice cream. The overall results of the one-week auction were extremely gratifying.

The auction kicked off on Monday, 20 June with 815 objects from the fields of "Works of Art, Antiquities and Asian Art". Diving right in, a beautiful painting sold for almost five times its starting price. Estimated at 240 euros, the 19th century still life from France, lot number 7022, was snapped up for 1,187.50 euros. 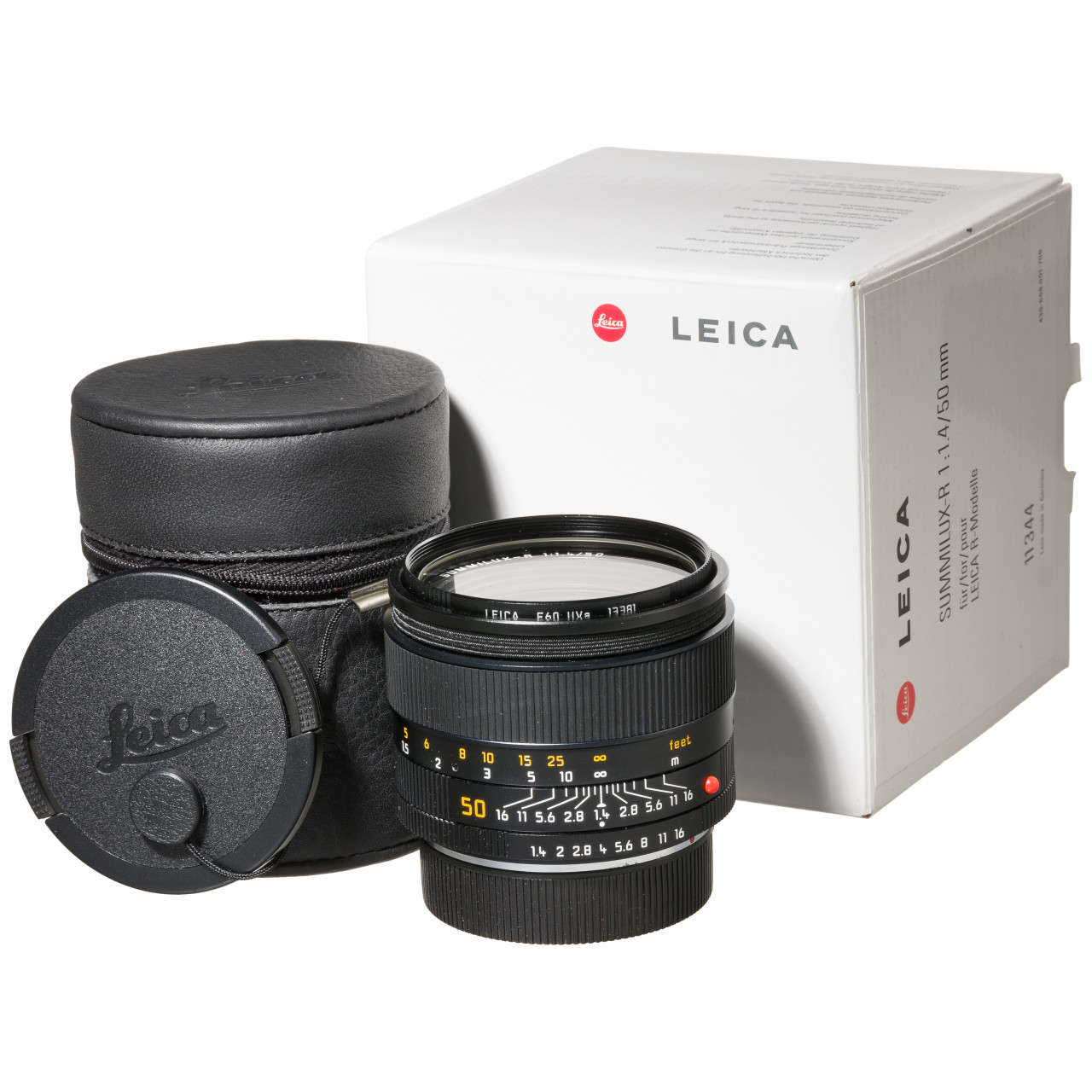 Moreover, a number of intriguing bidding trends were observed in the scientific instruments section. While several highlights among the wide selection of Leitz photographic equipment failed to generate response, others – such as lot 7589 – fetched spectacular final prices. Thewide-angle lens made by the prestigious company changed hands for 4,000 euros, dwarfing its limit of 260 euros. Next up, the standard lens Summilux-R by Leitz (lot number 7590) certainly caused a stir. Within minutes, bids soared from the catalogue price of 350 euros to four figures. One enthusiast was ultimately coaxed into investing 3,750 euros.

There were some thrilling bidding skirmishes over the prizes in the chapter of Asian art. A formidable Buddha Shakyamuni, lot number 7647, had been valued at 800 euros. However, the 18th or 19th century Tibetan figure of the seated Buddha was extremely well received, finally selling for 3,375 euros.

Among the antiquities, lot 7761 took the audience by storm. A Roman marble head dating from the late 2nd or early 3rd century was listed at 300 euros. However, the bearded man with an impressive head of curls enticed the winning bid of 1,750 euros.

A late Roman drinking cup, painted with a toast, found a new owner for the same price, namely 1,750 euros (lot 7787). The guide price of this rare beaker, dating from the late 3rd to the early 4th century, was just 300 euros. 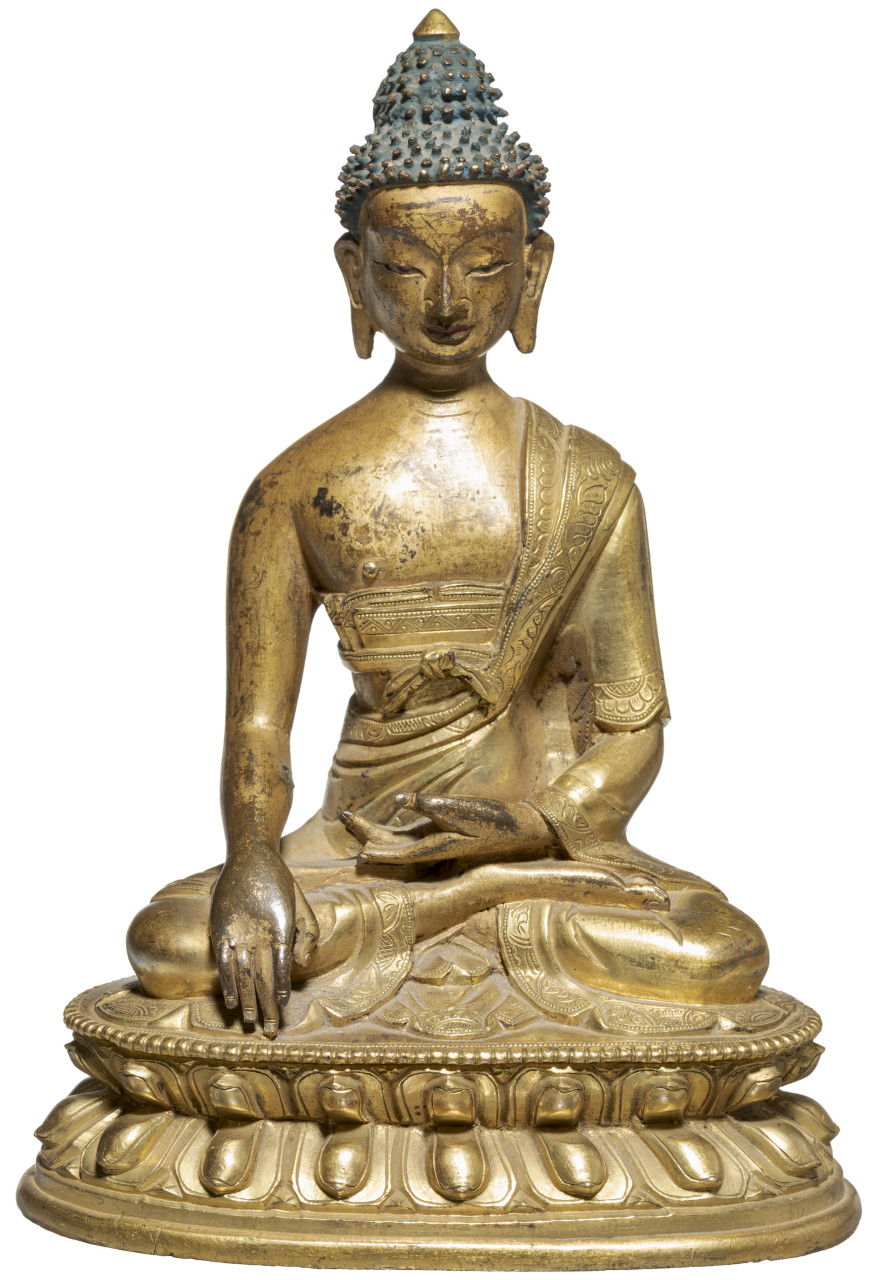 Antique arms and armour from all over the world 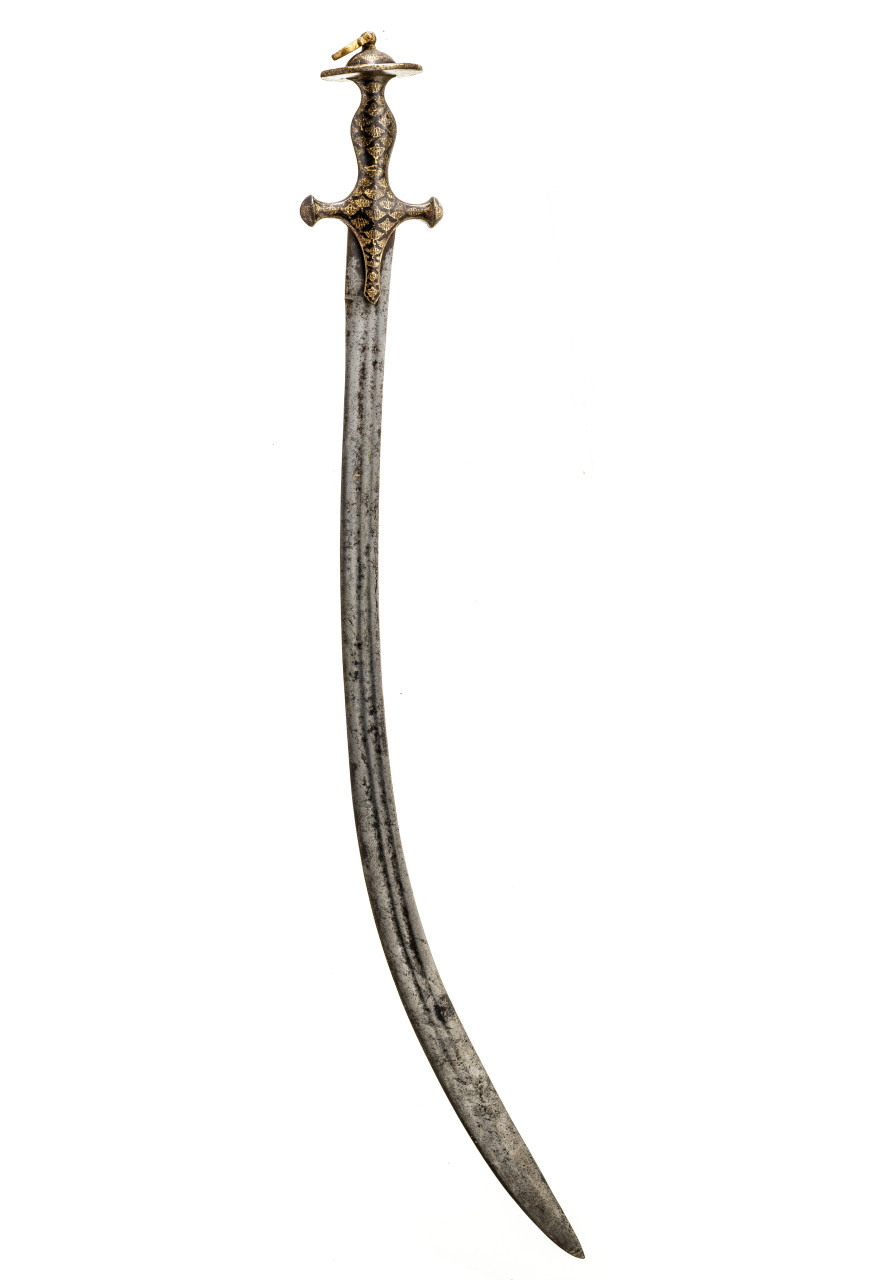 On Tuesday, 21 June, buyers embarked on a journey to the world of castles and knights. The auction day was entirely dedicated to the 300 pieces of antique arms and armour.

The centre of attention was a 16th or 17th century coat of mail from the Ottoman Empire. The hip-length coat of riveted rings, lot number 8028, was acquired for 2,000 euros, thereby exactly doubling its asking price of 1,000 euros.

From India, lot 8096 was also highly sought after. Although offers from 200 euros had been invited for the gold-inlaid tulwar dating from 1800, the avalanche of bids drove the price up to 1,625 euros.

Lot 8257 stood head and shoulders above the other German weapons. Embellished with graphic decor, the 17th century left-handed dagger now graces a new collection for 3,125 euros, its reserve of 1,900 euros notwithstanding.

On Wednesday, 22 June, almost 900 objects kept online bidders glued to their screens. Scores of weapon collectors battled it out in some nail-biting bidding wars. Among the civil firearms, lot 9121 was very much in favour. The pair of British flintlock pistols circa 1810 was offered for sale from 600 euros. Together with a wooden case of later date and a powder flask, the pistols closed at 1,500 euros.

Meanwhile, there was lively interest in not one but two modern firearms produced by Simson of Suhl. Lot 9369, a Makarov PM9 in near mint condition from the pre-production series, was announced for 350 euros. The audience paid homage to this desirable model with 2,125 euros. Despite opening at 700 euros, the model NP 20 by Simson eventually commanded the handsome sum of 1,750 euros (lot number 9760).

One weapons enthusiast was determined to acquire the 1885 British Webley Pryse no. 4 revolver (lot number 9613) by bidding ten times its reserve of 150 euros. After a short, yet intensive round of bidding, he was finally able to claim his rare prize for 1,500 euros.

The battle for a decorative firearm in the service weapons section was equally fierce. Bids from 4,800 euros were welcome for an antitank grenade rifle 39 (lot number 9760). Nonetheless, it now takes pride of place in a new collection for almost twice that sum, namely 9,250 euros.

Lot 9813 was a remarkably rare discovery. The Spreewerk P 38, code "cvq" of the S series, was listed at 2,400 euros. Together with the matching muffler, the sale was only completed at 5,000 euros. 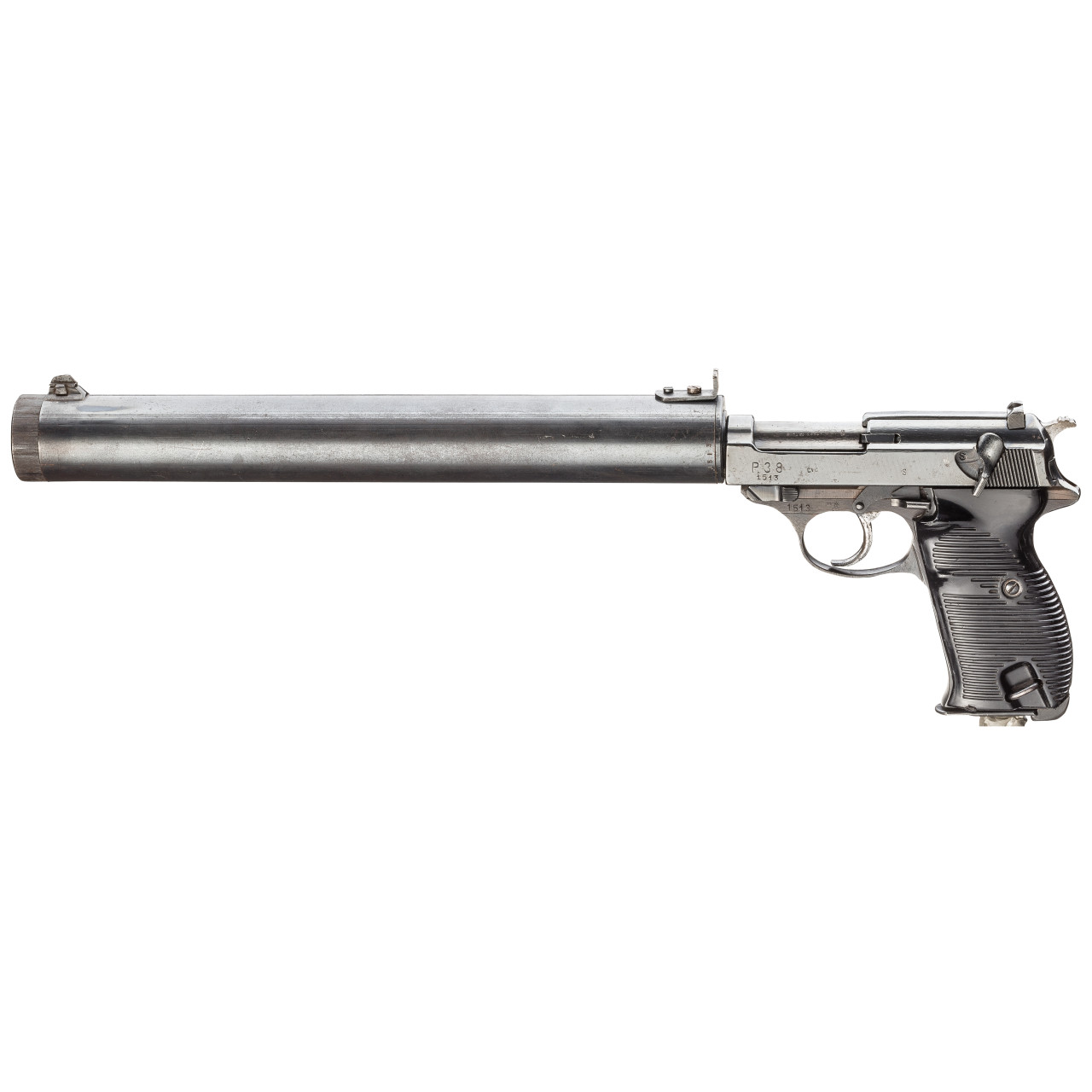 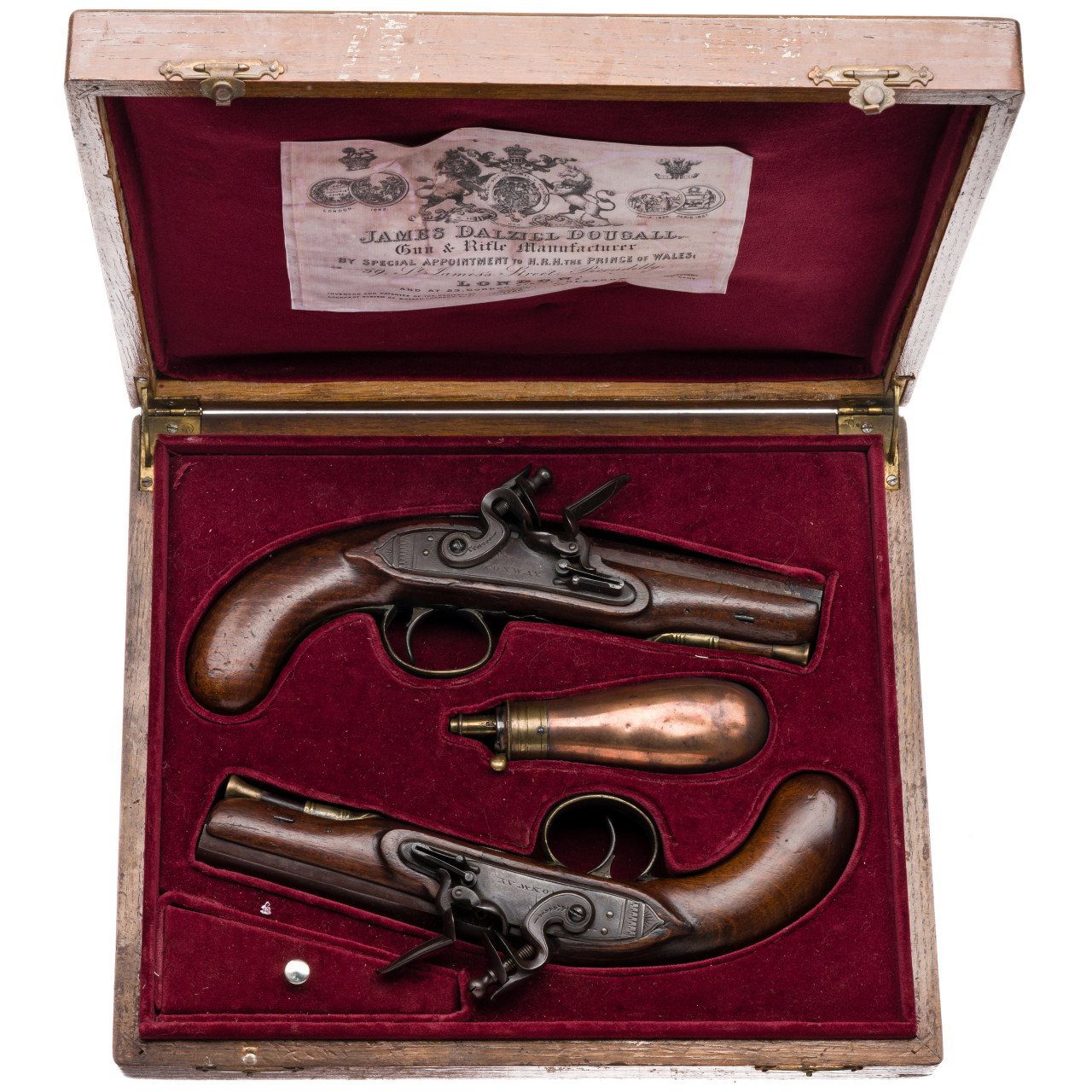 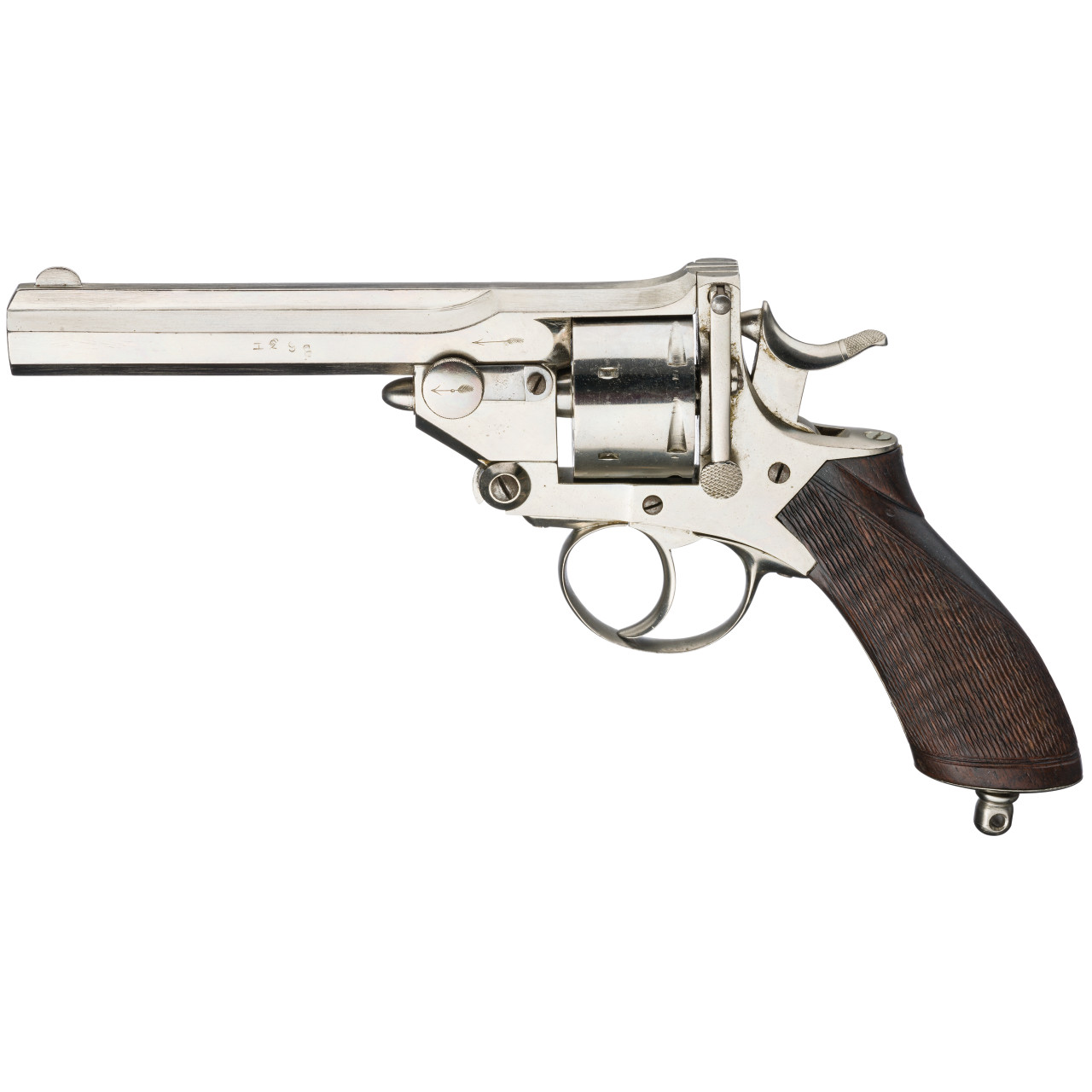 Orders and Military Collectibles until 1918 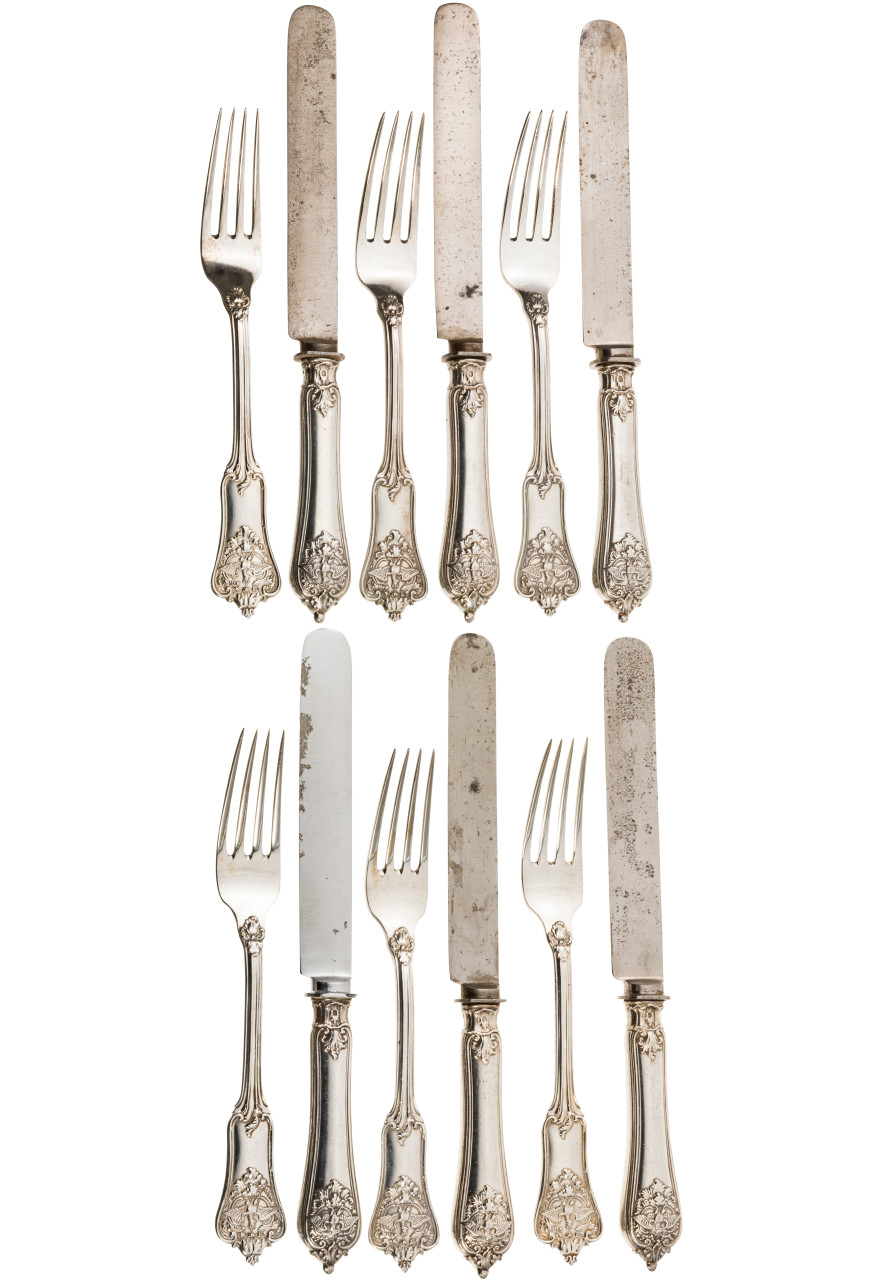 By contrast, the fourth auction day on 23 June, with just under 340 military collectibles until 1918 from Germany and all over the world, was very relaxed. There were some pleasing results to report all the same.

Moreover, there was a chance to acquire a number of pieces from the fabulous tableware used by the Prussian ruling family of Wilhelm II. Art lovers were particularly taken with six dinner forks and six knives from the Kaiser's rococo table silver. Stamped with the cipher "WR" and the Prussian eagle, the cutlery (lot number 10257) was valued at 2.400 euros and found a new owner for 3,625 euros.

An inimitable wall eagle circa 1900 with the same provenance – also from the Prussian ruling house – had received numerous bids during the run-up to the auction. With its detailed rendering and solid weight of approximately 11.5 kg, the facade eagle captivated collectors from near and far. This enthusiasm was clearly reflected in their readiness to bid. The starting price of 4,000 euros was quickly forgotten as the majestic eagle, lot number 10271, ultimately hammered at 13,750 euros. 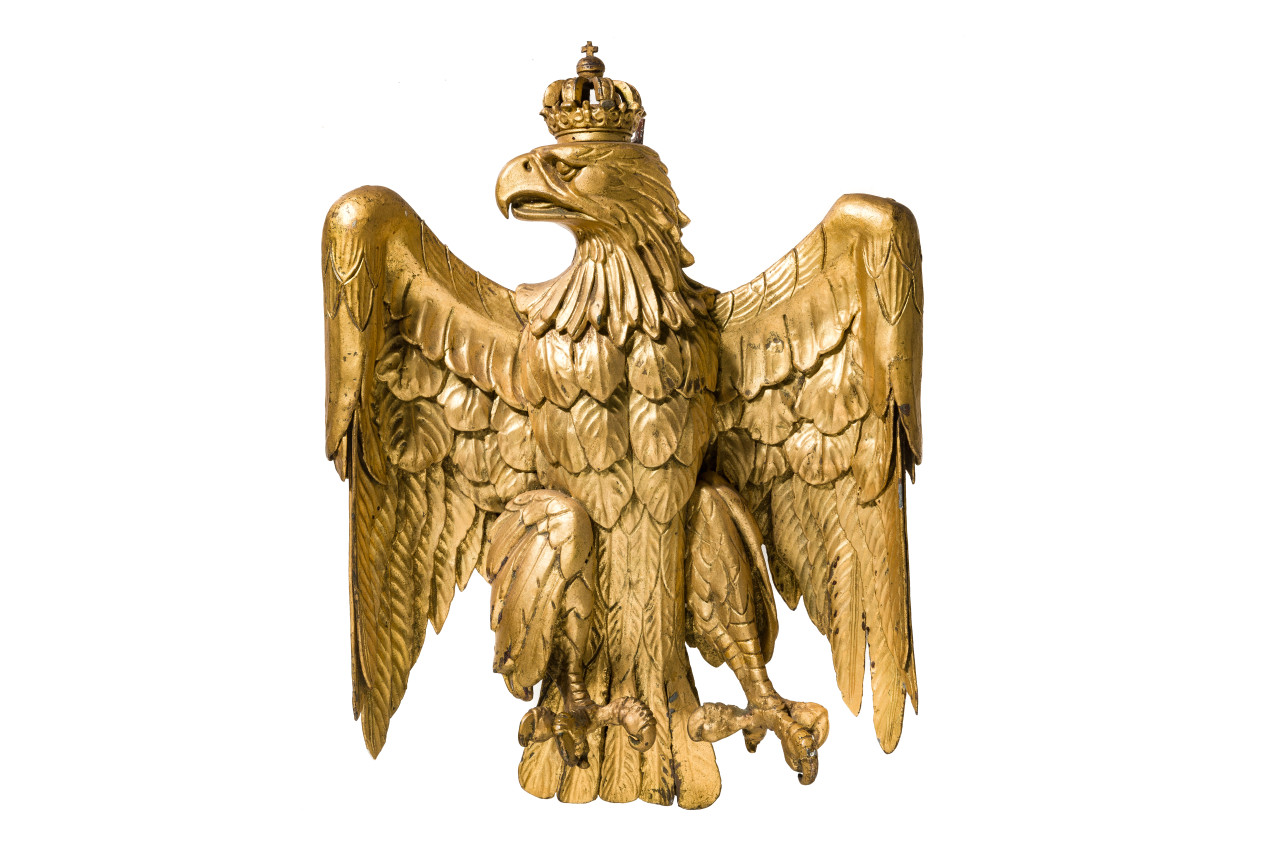 Orders and Military Collectibles from 1919 onwards

On the last day of the auction, 24 June, the spotlight was on 984 lots comprising "Orders and Military
Collectibles from 1919". The outstanding collection of communication equipment and accessories, along with measuring instruments used by the army, navy and air force, had been highly anticipated. Featuring groundbreaking technology at the time, the success of the collection has now also earned the same accolade. A whopping 95% of the almost 300 lots were sold. 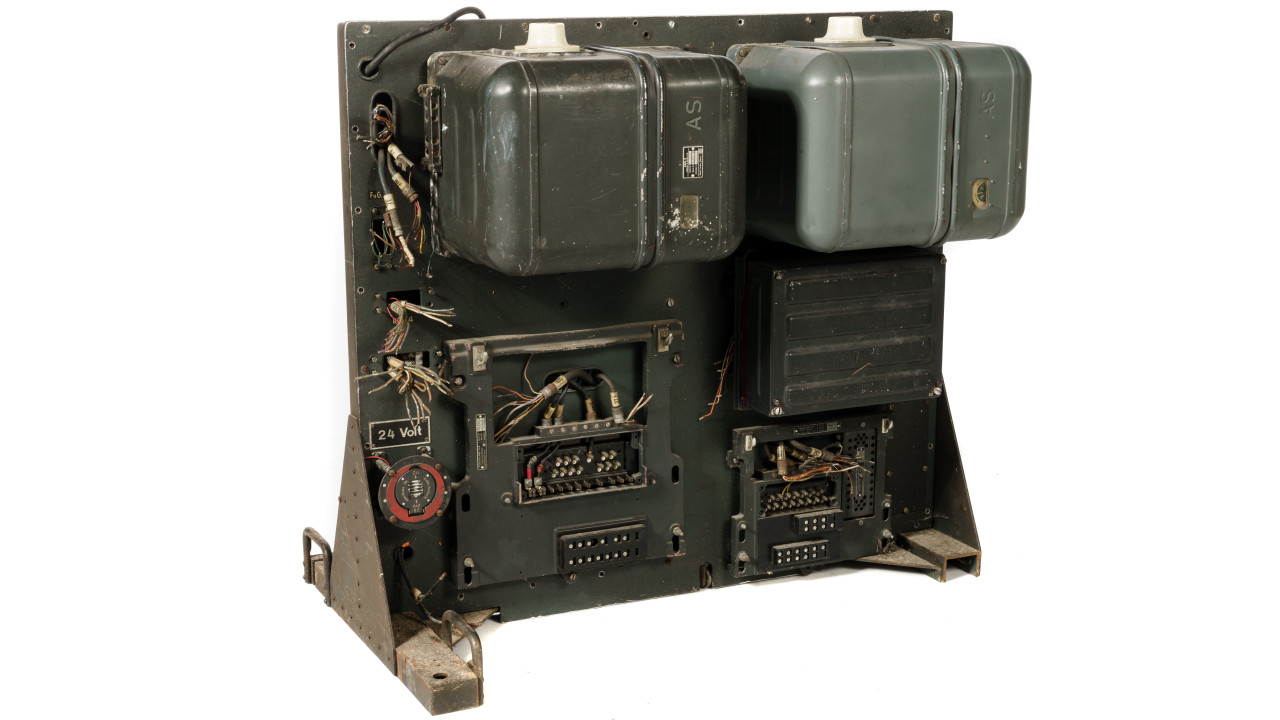 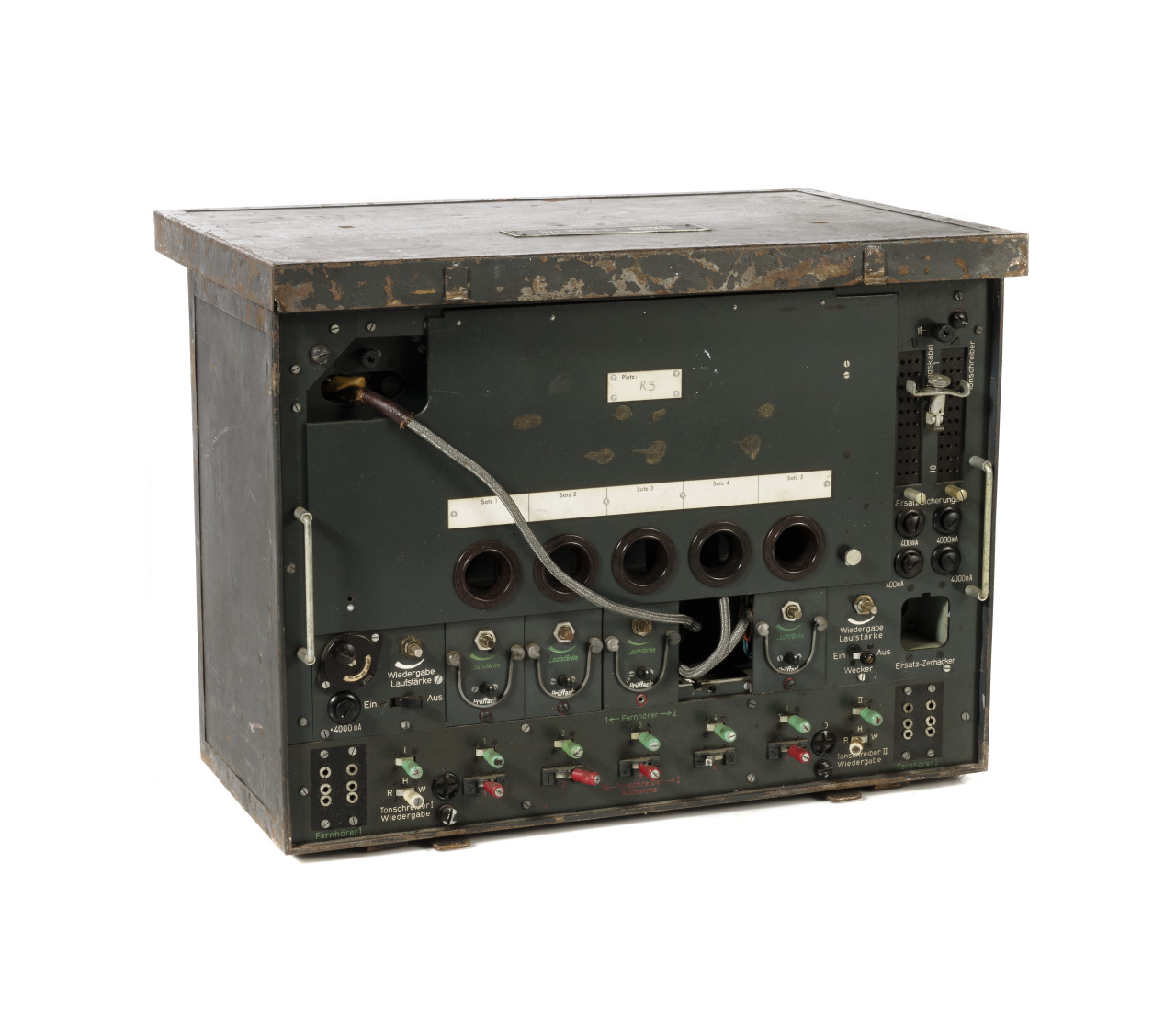 Meanwhile, a minimum bid of 800 euros would secure a radio direction finder (lot number 11442) in original condition. Even so, the new owner had to dig deep into his pocket, pledging 3,500 euros for the 31 kg receiver.

A rare listening device for monitoring telephone calls by the manufacturer "bxo" (= Deutsche Telephonwerke und Kabelindustrie AG, Berlin), bearing the serial number 130/43, caused quite a commotion. Lot 11488 raced past its reserve of 500 euros before the gavel finally fell at 2,375 euros.

Why not browse through the online catalogue? The post-auction sale of this online-only auction runs until 31 July. During this time, all unsold lots may be purchased for their catalogue price, plus a buyer's premium.

As usual, please see www.hermann-historica.com for further details and the respective catalogues.