98,000 euros for the Schlüsselgerät 41 cipher machine – the superior, unbreakable ENIGMA and ineffectual Wunderwaffe – in the 79th Auction of Hermann Historica GmbH

The announcement of the highlight of the 79th Auction, a Schlüsselgerät 41, immediately attracted enormous attention all over the world. The device is so rare that even the world's most prestigious science and technology museums consider themselves fortunate if they have a heavily corroded archaeological find in their collection. However, opening at 75,000 euros, lot number 4401 revealed an absolute showstopper, in immaculate condition and fully functional. Dubbed the "Hitler Mill" owing to its crank mechanism, only a handful of functional machines still exist.

The internationally renowned specialist in encryption devices, Klaus Kopacz (71) of Stuttgart, himself a telecommunications engineer, expertly opened up and inspected this completely undamaged model of the coding machine, which was developed after 1941, actually managing to get it running in the auction house. Entirely in keeping with its intended purpose, the device encrypted and decrypted a text, printing the original text on one of its two strips of paper and the code on the other. 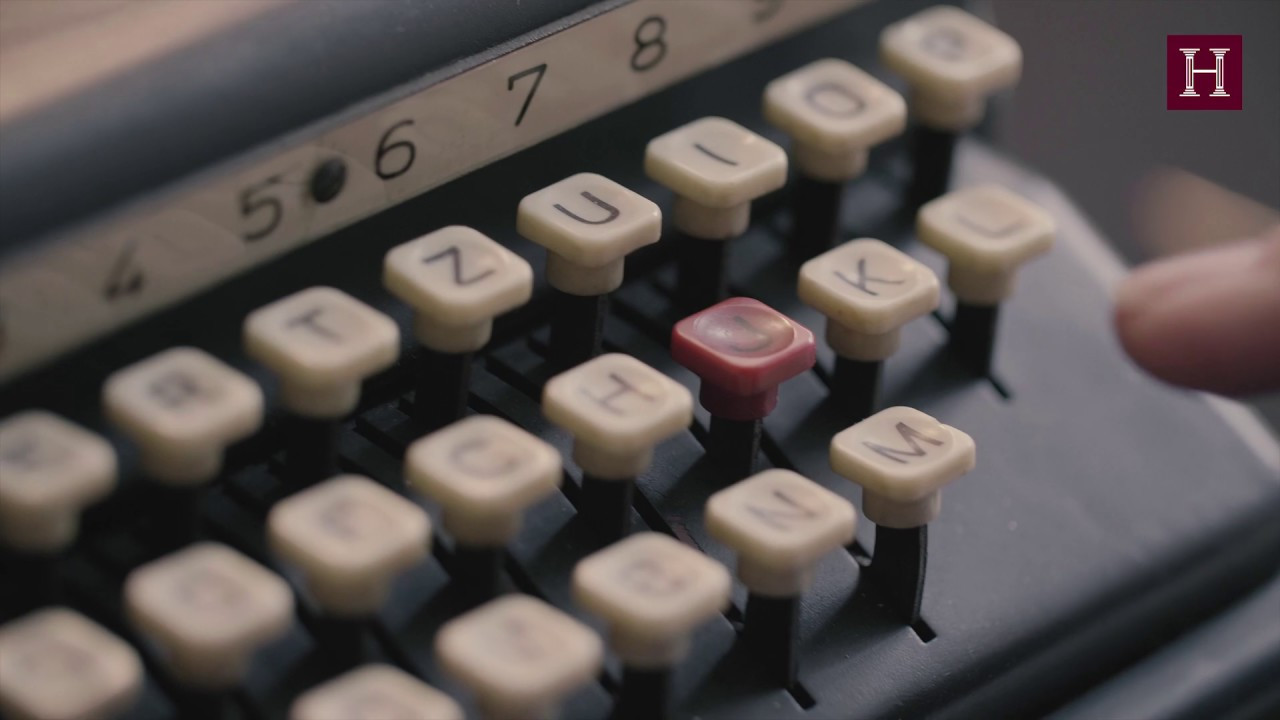 It therefore came as no surprise that a torrent of offers poured in during the runup to the auction and on 24 May, the day of the actual sale, enthusiasts pushed the price higher and higher by telephone and on the internet in a veritable bidding frenzy. All of this was in direct competition with the floor bidders, the tension palpable in the packed room, until the hammer finally fell at 02 pm at the respectable price of 98,000 euros for an Irish private collector.

Those in the know are one step ahead; but victory comes to those who know more at an early stage. Working on this assumption, the British secret service had assembled the country's most outstanding analysts in Bletchley Park, people from a wide range of professions, to collaborate on decrypting the enemy's coding machines. While the leaders of the Wehrmacht, apart from a few warning voices, were reassured by the fact that the legendary Enigma cipher machine was said to be unbreakable, the British cryptanalysts, led by the mathematician Alan Turing, had already deciphered its underlying principle in spring 1940 and were able to transform encrypted messages into plain text at the flick of a switch from 1941.

It was only at this juncture that the Wanderer Werke in Chemnitz were commissioned to develop a new, improved machine. Based on significant input from the cryptologist Fritz Menzer (1908 – 2005), the purely mechanical Schlüsselgerät 41 was now modelled on the fundamental principle developed by the Swedish cryptologist Boris Hagelin (1882 – 1983), albeit with important modifications. The name of the machine derives from the year of its invention. 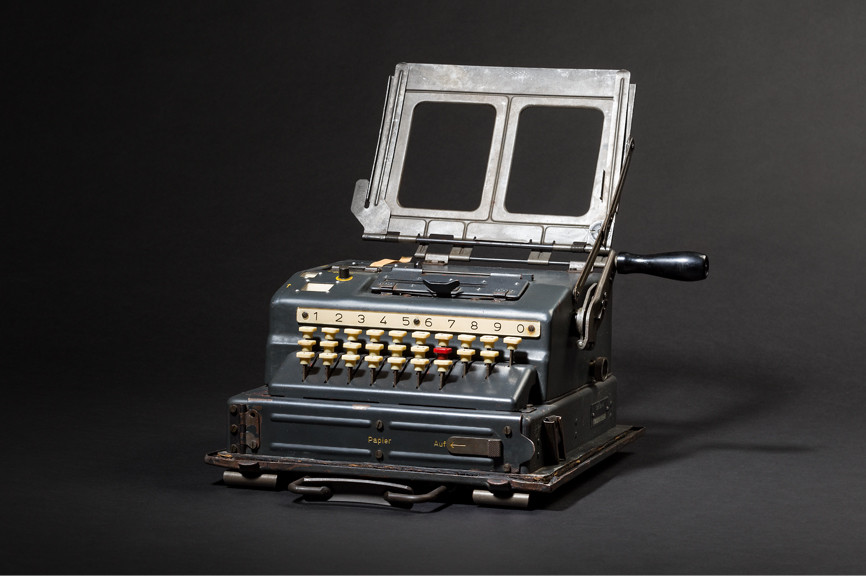 Unlike the Enigma, which used lamps for the letters, it worked with two reels of paper; the encryption process involved turning the drum through 360 degrees with the attached crank handle. This rotated six cipher wheels, rather than the previous three, of differing sizes, in a highly irregular motion, sometimes even backwards. Moreover, the position of one wheel affected the movement of the others. The recipient had to set the wheels in the identical starting position before entering the encrypted text. The plain text and the encrypted message were printed in parallel on two strips of paper. Of the 11,000 devices ordered, only approximately 500 units were shipped to the Abwehr, or military intelligence service, and another 1,000 to the weather service, from October 1944. However, the latter was supplied with the SG-41Z numerical version, with numbers instead of letter keys. Weighing in at 13 kilos, the SG-41 was deemed too heavy for front line use.

Even the experts in England failed to reconstruct – and thus decipher – the SG- 41 by the end of the war. Accordingly, the allies described the cipher machine with deference as a "remarkable machine". According to the cryptology expert Klaus Kopacz, had this new encryption technique been deployed earlier, it would probably have extended World War II by approximately two years, although it is unlikely to have affected the outcome. 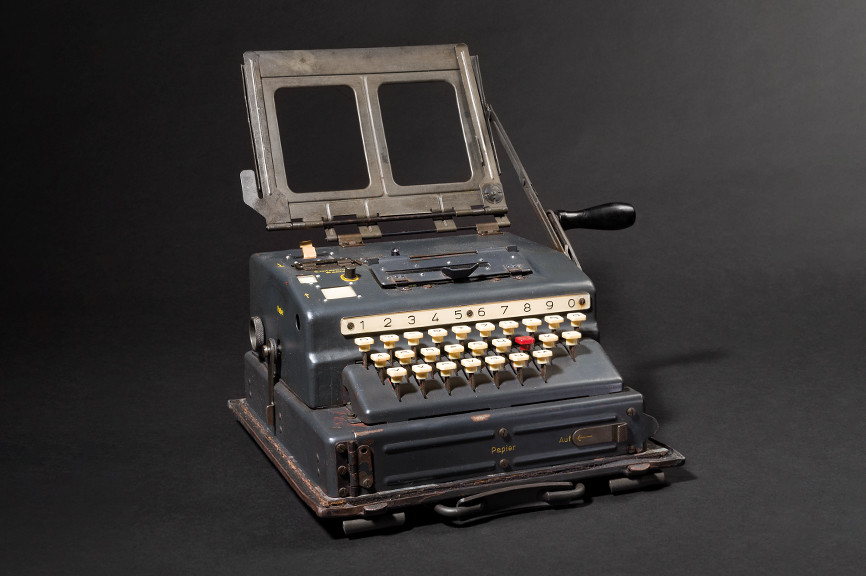 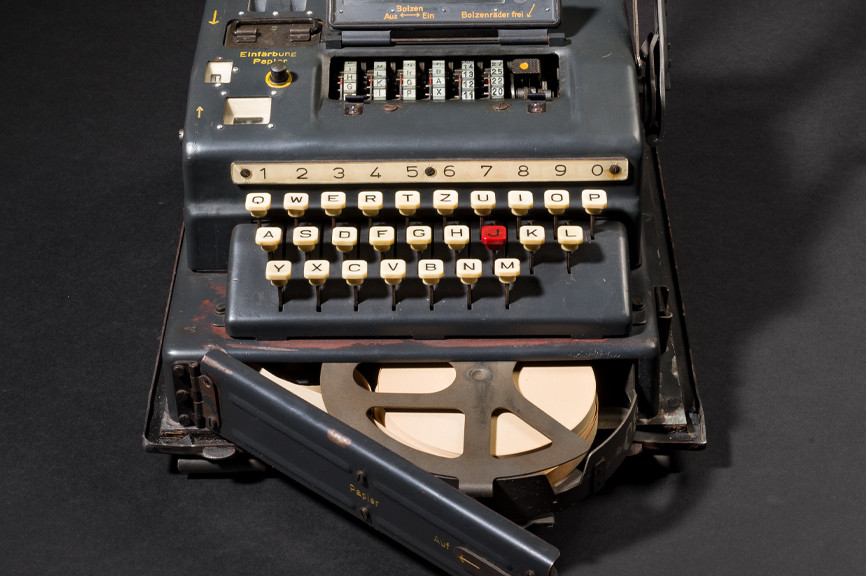 The device appears to be fully intact and working and is surprisingly well preserved. In recent years no sample of this ultra rare machine in an anywhere near as good condition has surfaced on the market!

or by Email to:
marketing(at)hermann-historica.com