Crowds of bidders paid homage to the first-class showstoppers

Going, going, gone: a multitude of hands would shoot up in the saleroom and the ears of the telephone bidders were throbbing, the online bidders were fighting against each other while the auctioneer's hammer kept coming down with a bang. Never before – or at least, that's how it seemed – were as many lots sold as during these auction days.

The auction week at Hermann Historica kicked off on Monday 22 November. Almost 900 lots from the catalogue of "Works of Art, Asiatica and Antiquities" changed hands on the first day: for twelve hours non-stop, the pre-sale offers battled it out with the deluge of bids placed over the phone, online and by the floor bidders who braved Covid-19 to attend in person.

Lot number 21 scooped a premium price for the auction house in the painting category. The large-format picture by Giovanni Batista Salvi featured a splendid caravan scene in oriental style. The masterpiece ultimately fetched 15,000 euros, more than ten times its estimate of 1,200 euros. No less vibrant, lot 341 was also exquisitely painted. The reserve of 8,500 euros proved too tempting for the magnificent Minnekästchen, dating from circa 1450. Embellished with crests, a box lock and a handle, the small coffret finally sold for a very respectable 21,250 euros. 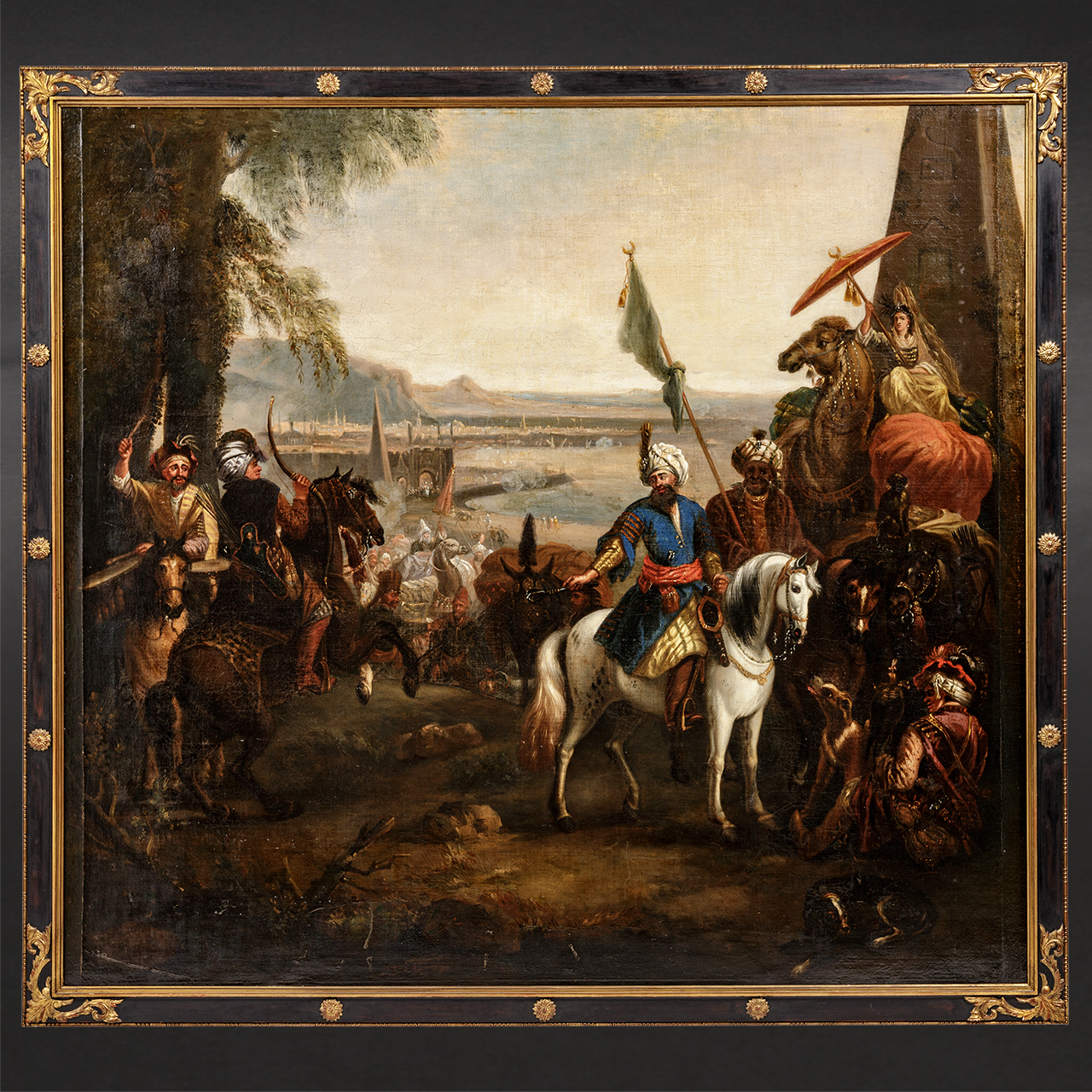 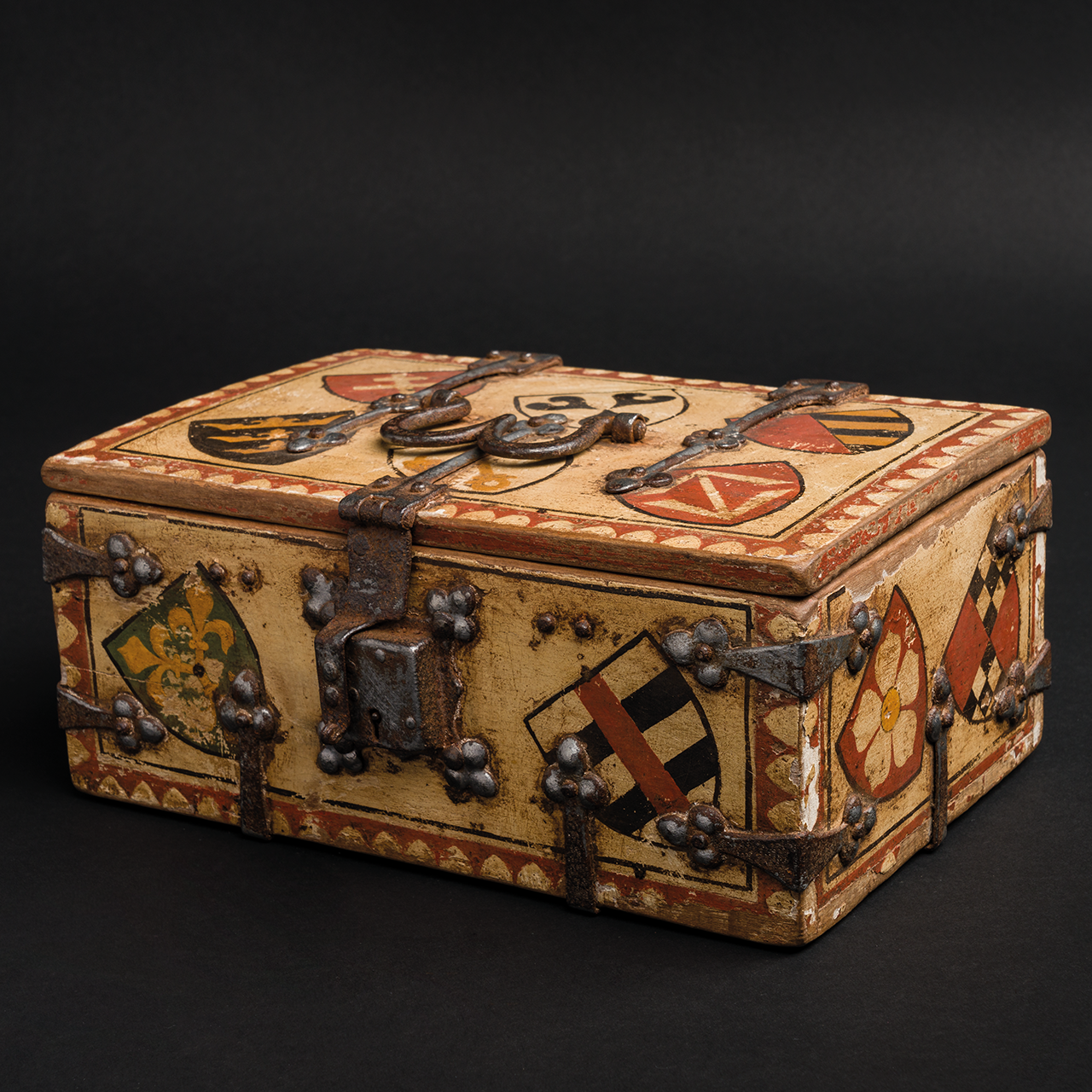 Enthusiasts also vied for the jade and porcelain prizes among the works of Asian art. Bids from 600 euros had been invited for lot number 515, a zhulong amulet. However, after just a few minutes, the pig dragon pendant shot up to its hammer price of 9,250 euros. Next, a delicate, shallow bowl with a superb celadon glaze was valued at 500 euros. However, the rarity and outstanding condition of this fine porcelain piece, stamped with the Qianlong mark, held buyers in thrall and it soon soared to 4,500 euros, nine times its limit. Lot 617 was equally well received. Listed at 1,000 euros, the fabulous famille verte gu vase with its finely coloured décor obviously appealed to numerous collectors. The sensational piece eventually coaxed the new owner into investing 6,250 euros.

Meanwhile, buyers often had to dig a great deal deeper into their pockets in the Antiquities section. A number of objects had starting prices in the high five-figure range – with good reason, as became clear in the course of the auction. The first prize to be announced under lot number 724 was a stunning gold necklace, dating from the second millennium B.C. Its minimum bid of 90,000 euros was nowhere near enough, however. This compelling testimony to early Elamite gold workmanship only closed at a gratifying 131,250 euros. Furthermore, a wonderful ointment jar (lot 729) was snapped up for 42,500 euros, its guide price of 28,000 euros notwithstanding. A Minoan rhyton from Ancient Greece, lot number 774, was tendered for sale for 4,500 euros. Nonetheless, the hammer did not fall until bids for the typical terracotta drinking vessel had reached 13,750 euros.

Number 798 was also regarded as a top lot: an extremely rare and uncommonly well preserved military face mask in iron from the Roman Empire. At the time, only highly experienced blacksmiths with outstanding craftsmanship skills were able to create iron masks of this calibre. This magnum opus now delights a new owner for 72,500 euros, almost tripling its asking price of 25,000 euros. From the same epoch, and perhaps just as remarkable, was the following lot 799, a ring pommel sword in excellent condition, for which bids from 12,000 euros were welcome. This showpiece more than doubled its estimate, completing the sale for 25,000 euros. 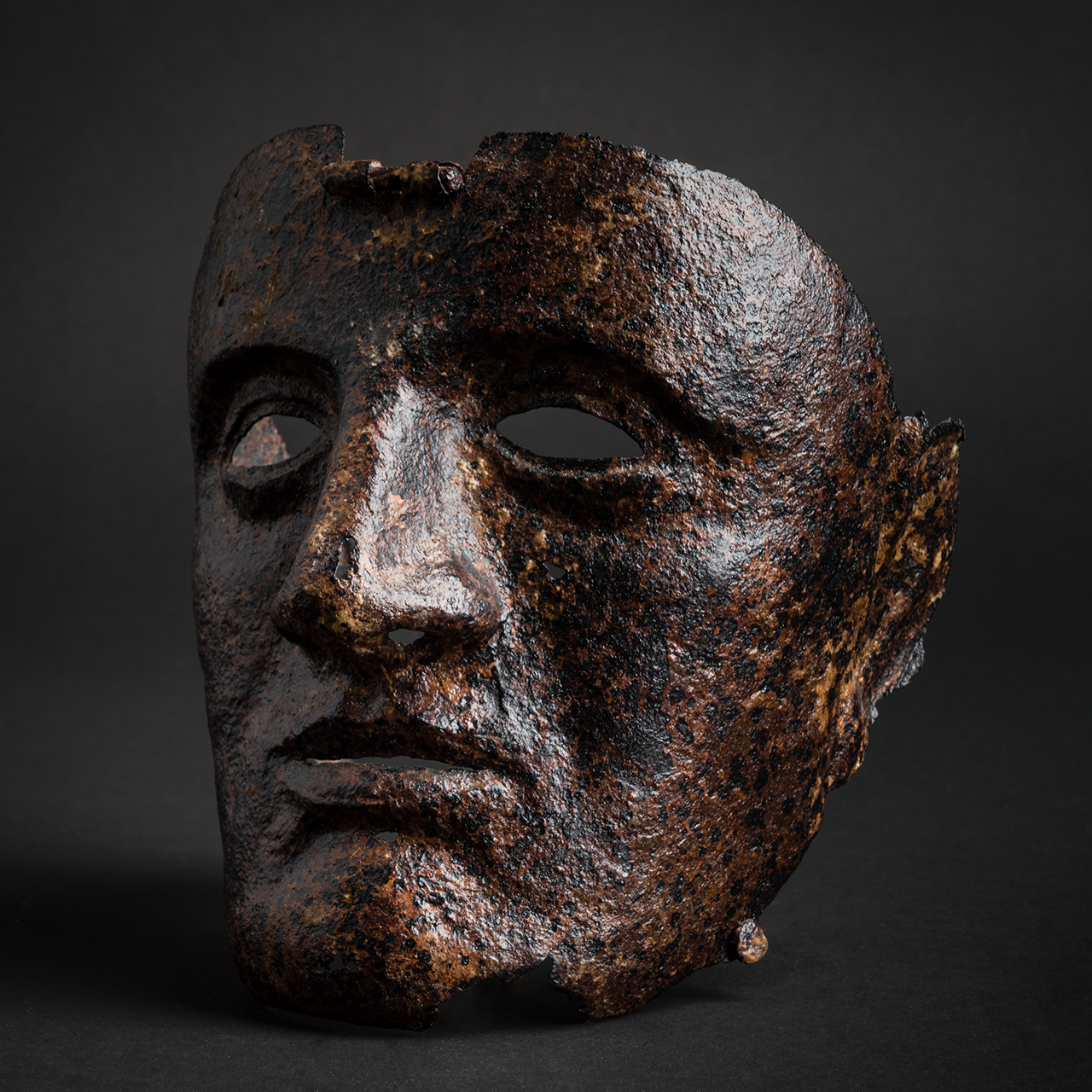 The auction on Tuesday, 23 November was devoted to the almost 280 objects in the catalogue of "Antique Arms and Armour from all over the world".

At first glance, lot 1029 seemed rather undistinguished and, valued at 500 euros, was not one of the top attractions. Nonetheless, the announcement of the silver-mounted, gold-inlaid qama caused an immediate buzz of activity. All phone lines were busy, the floor bidders sprang into action and bids came through thick and fast online. Christmas came early for one buyer as the short sword from Georgia sold for 8,250 euros, more than sixteen times its guide price. Another thrusting weapon, this time a pesh kabz from India, took a collector's fancy and accordingly commanded a handsome price. The exquisitely fashioned dagger, lot number 1044, adorned with gold décor and precious stones, raced past its estimate of 3,000 euros, chalking up the pleasing sum of 13,750 euros. 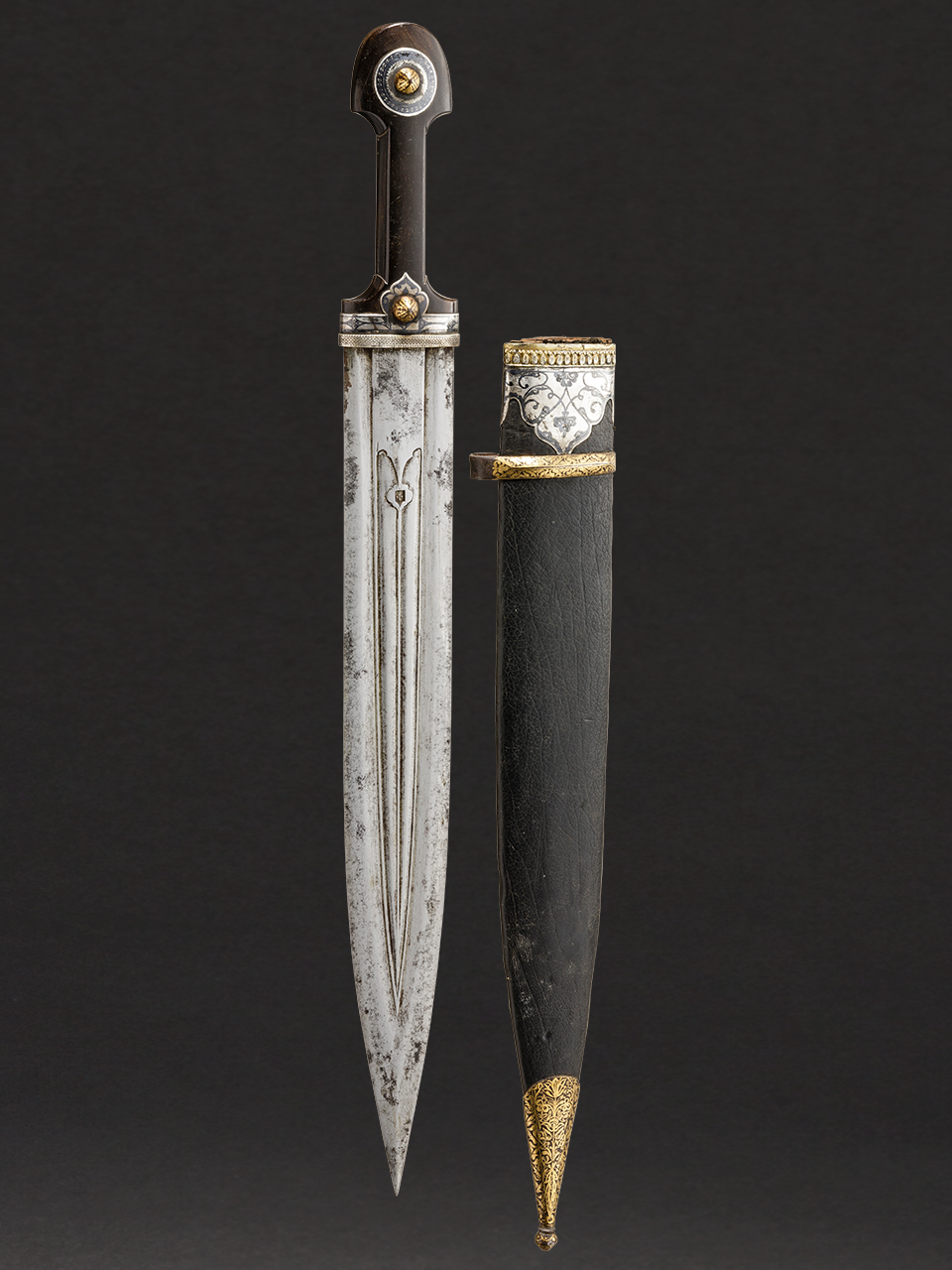 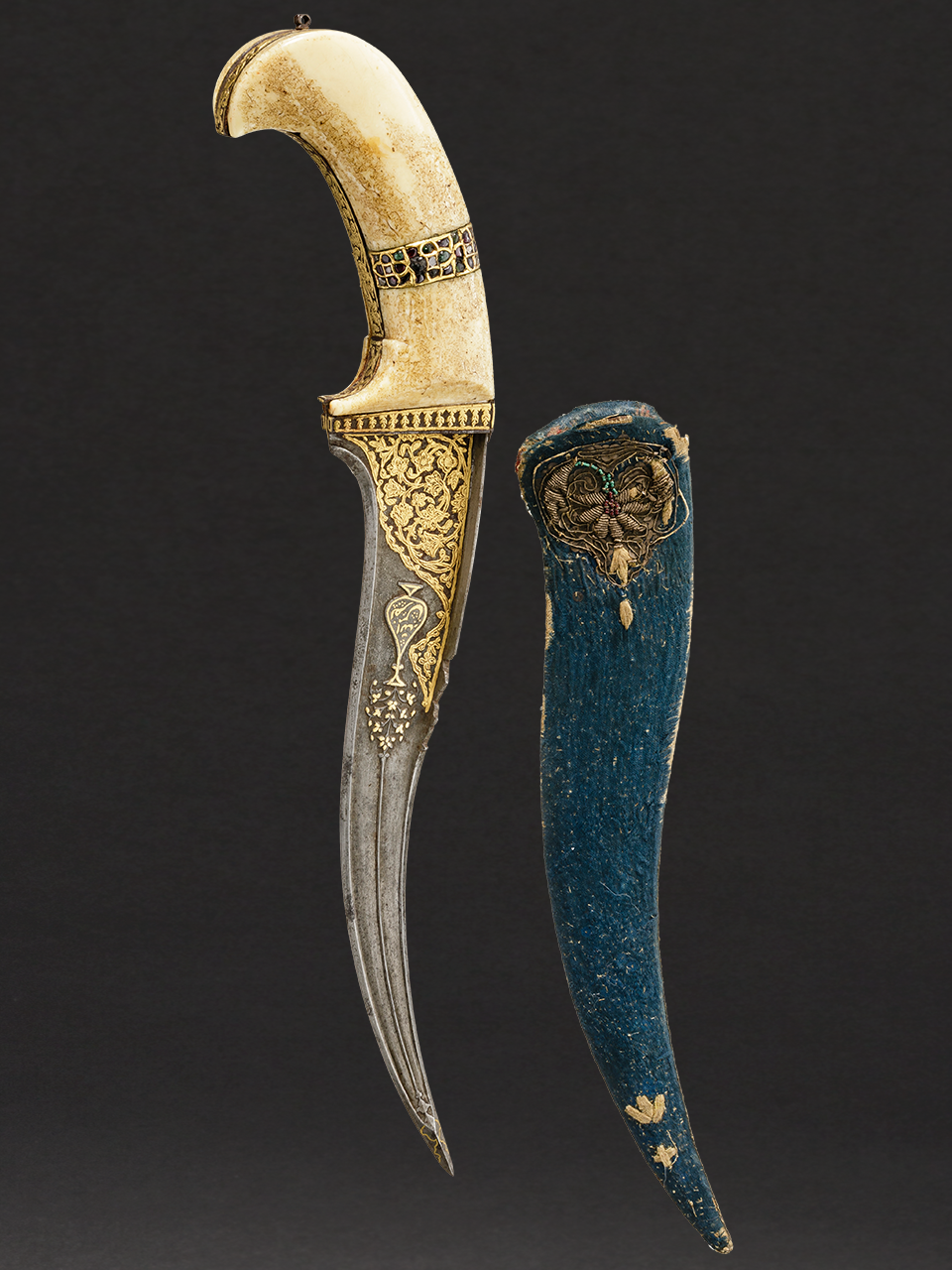 Among the spurs and stirrups on offer, a horse's muzzle (lot 1117) changed hands for 26,250 euros, thereby eclipsing its limit of 7,500 euros. Dated 1547, the wrought iron muzzle was decorated with a stunning floral framework and a fearsome dragon. Lot number 1209, one of the absolute highlights of the day, gave rise to euphoric scenes. The "Langes Messer" or one-handed sword from South Germany, circa 1530/40, was set to rake in 12,000 euros. Rare weapons of this superlative, courtly calibre are otherwise only found in museum collections. The lucky winner had to part with 42,500 euros. Also from South Germany, a Renaissance crossbow was listed under lot number 1267 for 12,000 euros. The heavy, iron prod with lavishly adorned bone managed to entice a final bid of 27,500 euros. Thrilling duels dominated the third day of the auction, 24 November 2021 with “Fine Antique and Modern Firearms” Lot 2062 proved particularly beguiling. The deluxe hunting wheellock rifle from the armoury of the noble Esterházy family ultimately sold for 52,000 euros, dwarfing its reserve of 14,000 euros. Moreover, with its equally ostentatious furniture in gilt brass, lot 2106 did not disappoint either. This distinguished pair of rare flintlock repeating pistols by Emanuel Wetschgin of Augsburg closed at a gratifying 28,750 euros. 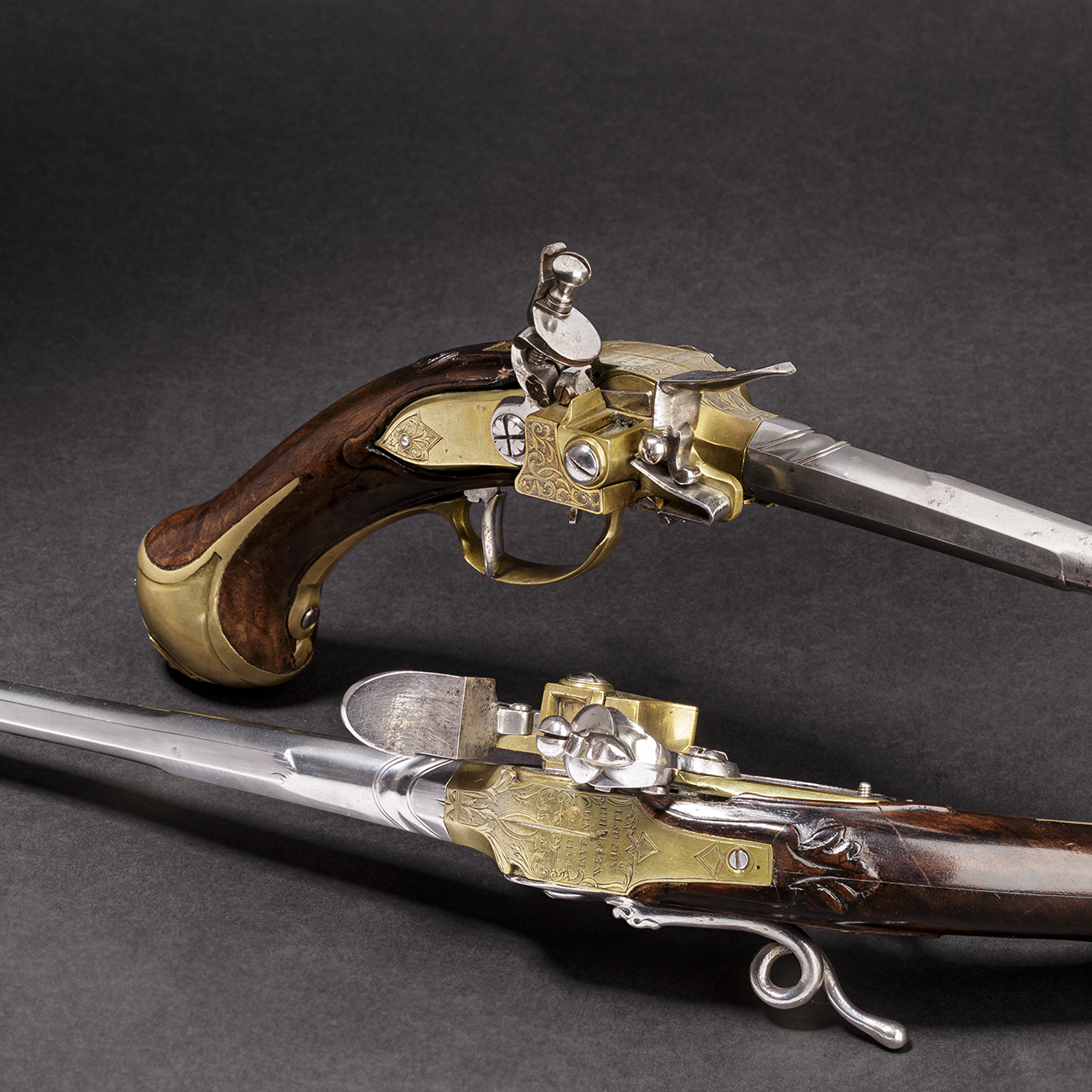 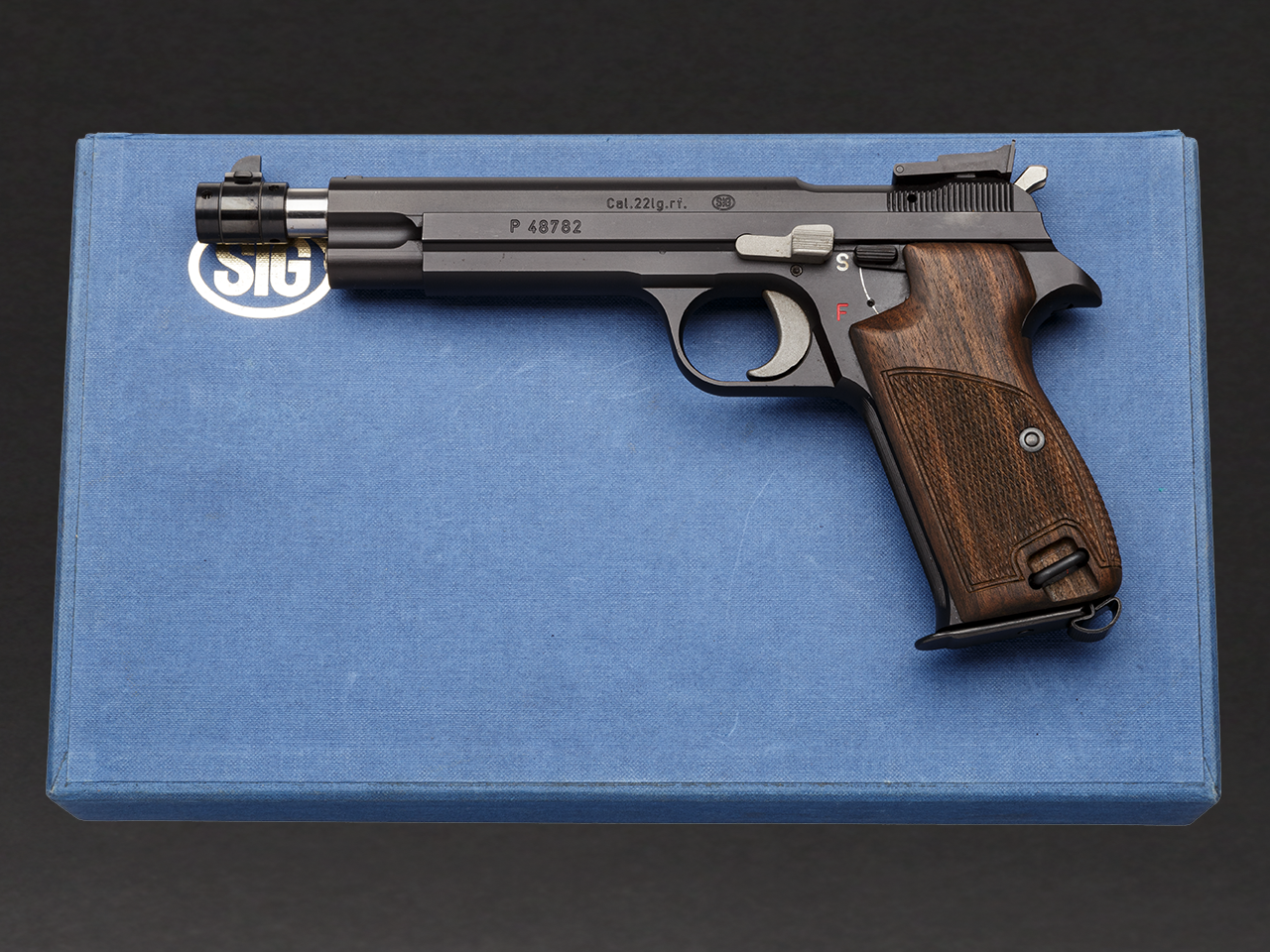 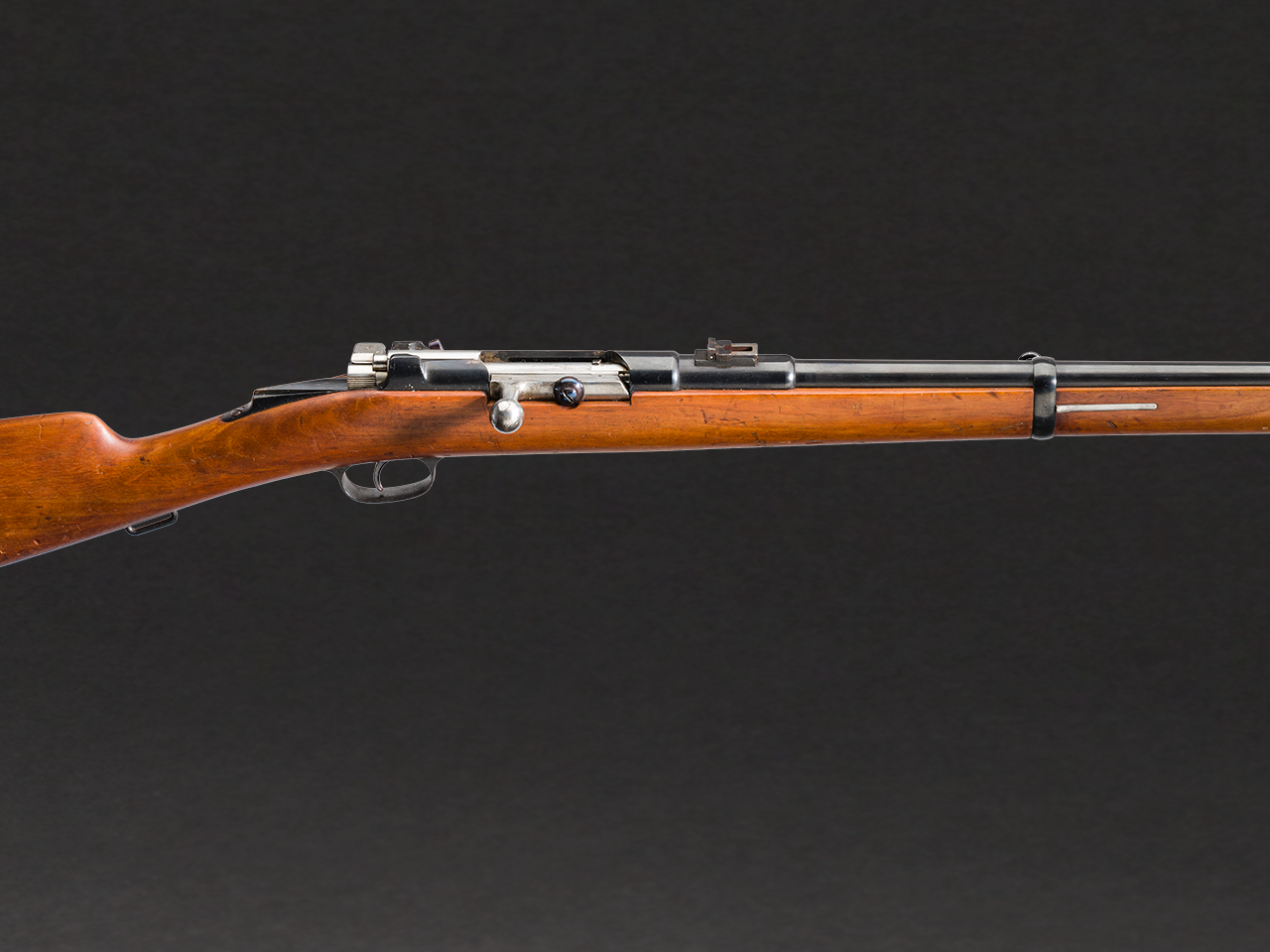 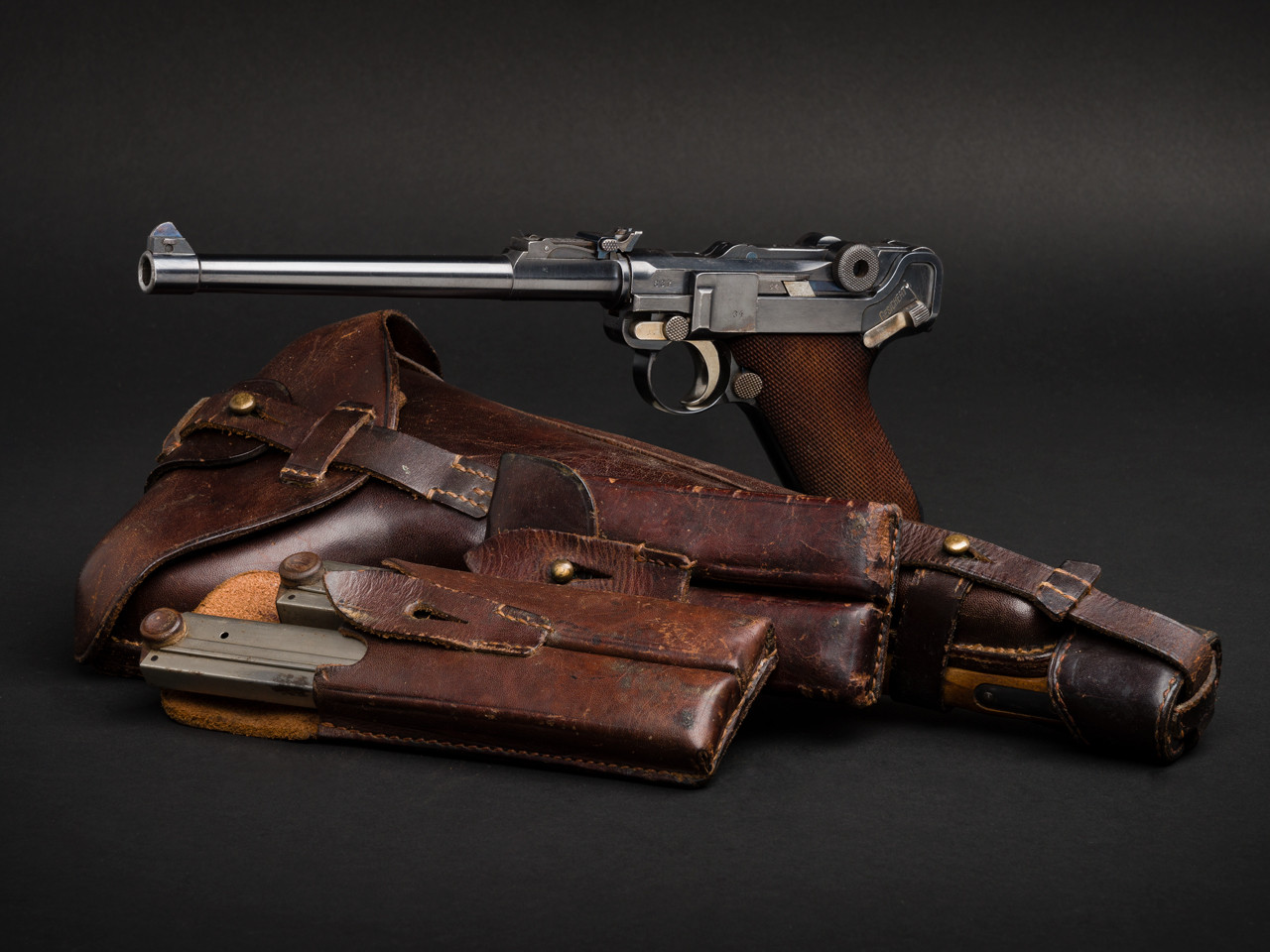 Thursday, 25 November was devoted to “Orders and Military Collectibles until 1918”. Highlights included a Russian Order of St. Stanislaus, one of the most sought-after insignia, even during the run-up to the auction. Bids from 4,000 euros had been invited for lot 3015, the highly decorative, matching orders set of the highest class, produced by court jeweller Eduards. More than doubling its reserve, it changed hands for 9,375 euros. Crowds of Sisi fans were waiting impatiently for lot 3129 to be announced. A beautiful summer dress worn by the Empress, enormously popular to this day, was coming under the hammer for 10,000 euros. They had to dig deep into their pockets nonetheless. The dress finally found a buyer for a sensational 80,000 euros – an eightfold increase. 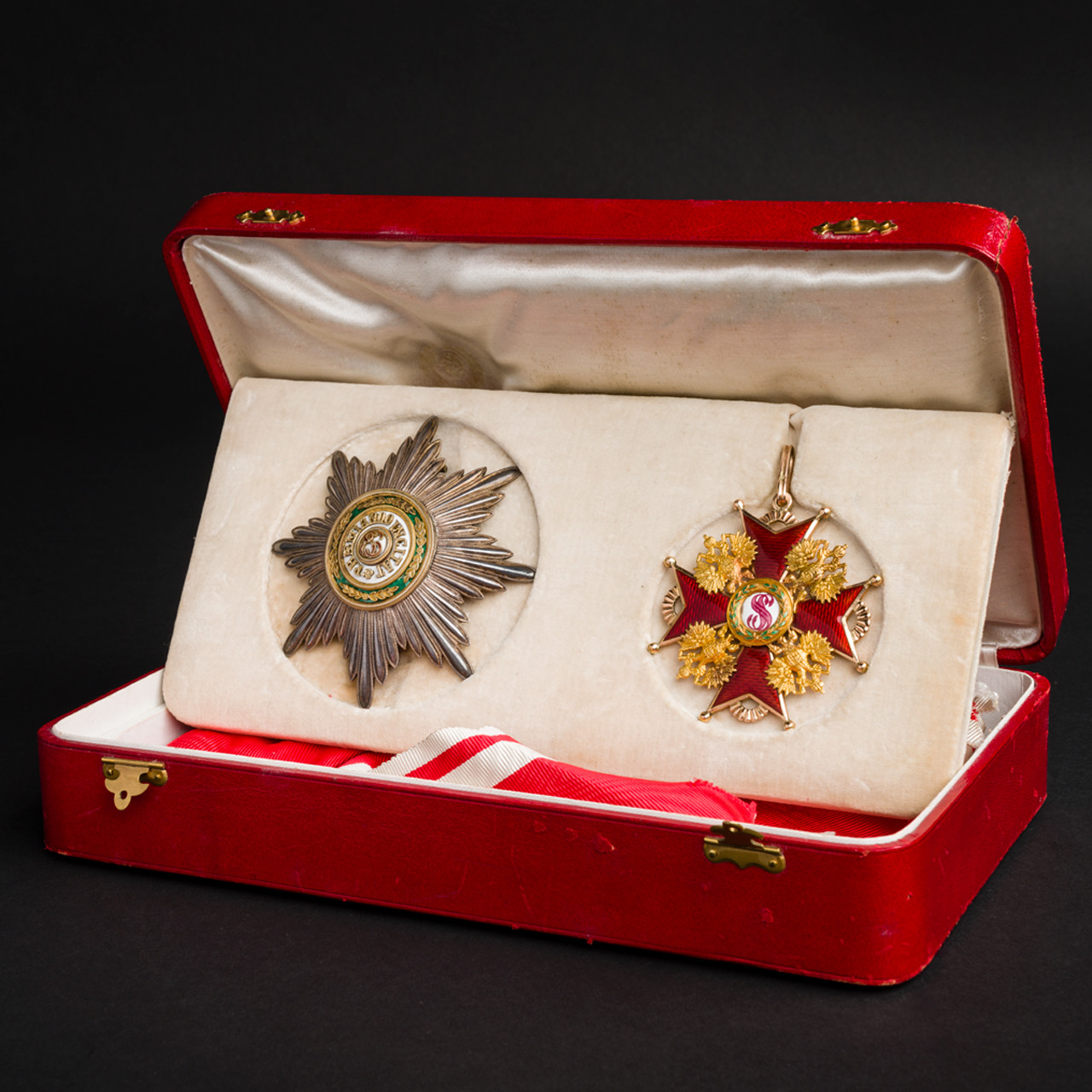 It was subsequently outdone by Sisi's much lauded silk glove (lot 3138), worn by the Empress on the day of her assassination, which a devotee snapped up for 82,000 euros, its limit of 12,000 euros notwithstanding. By contrast, a medallion with a portrait and a lock of hair might almost be considered a bargain at 8,000 euros; however, one admirer seized the opportunity for no less than 47,500 euros. 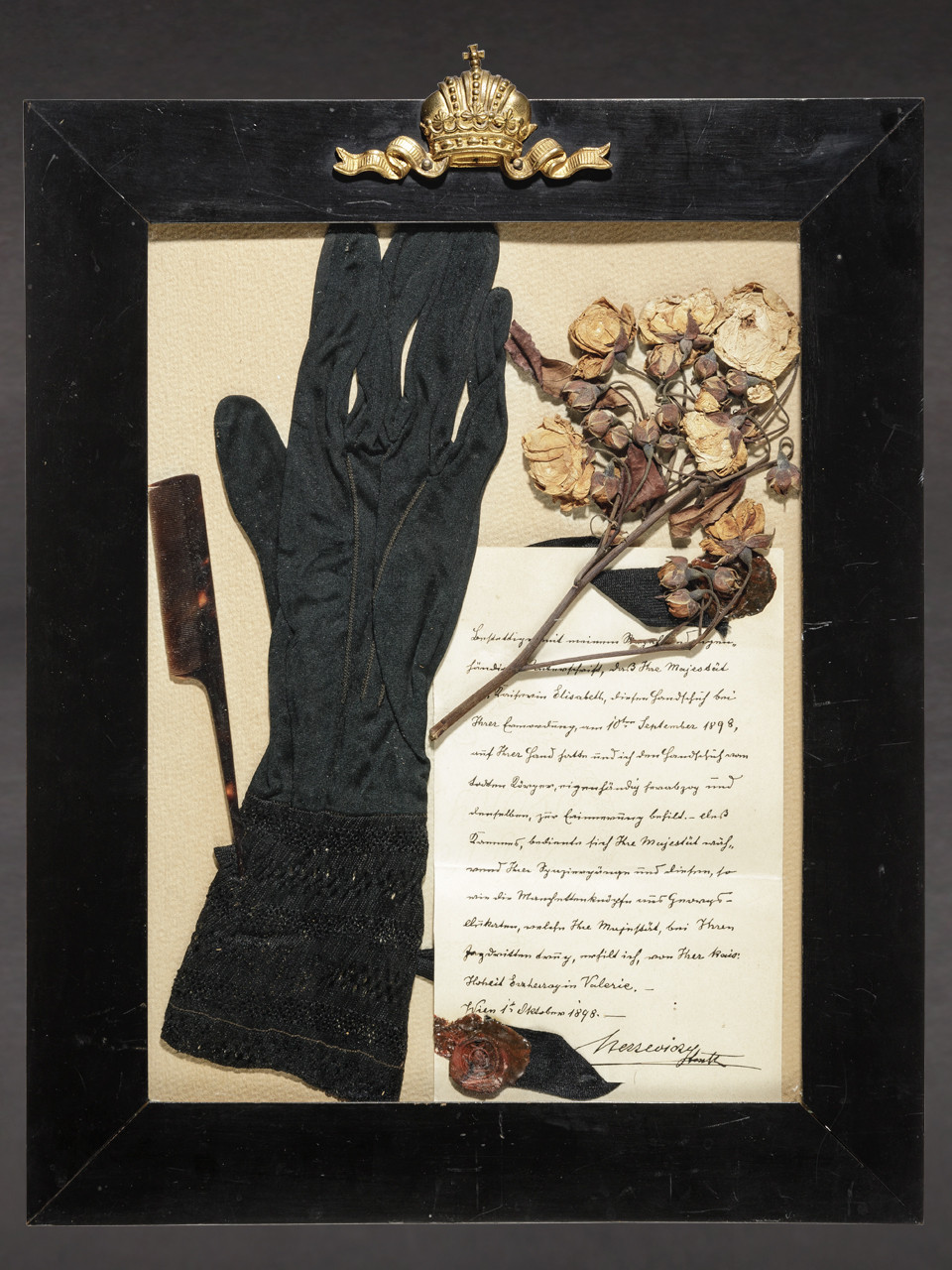 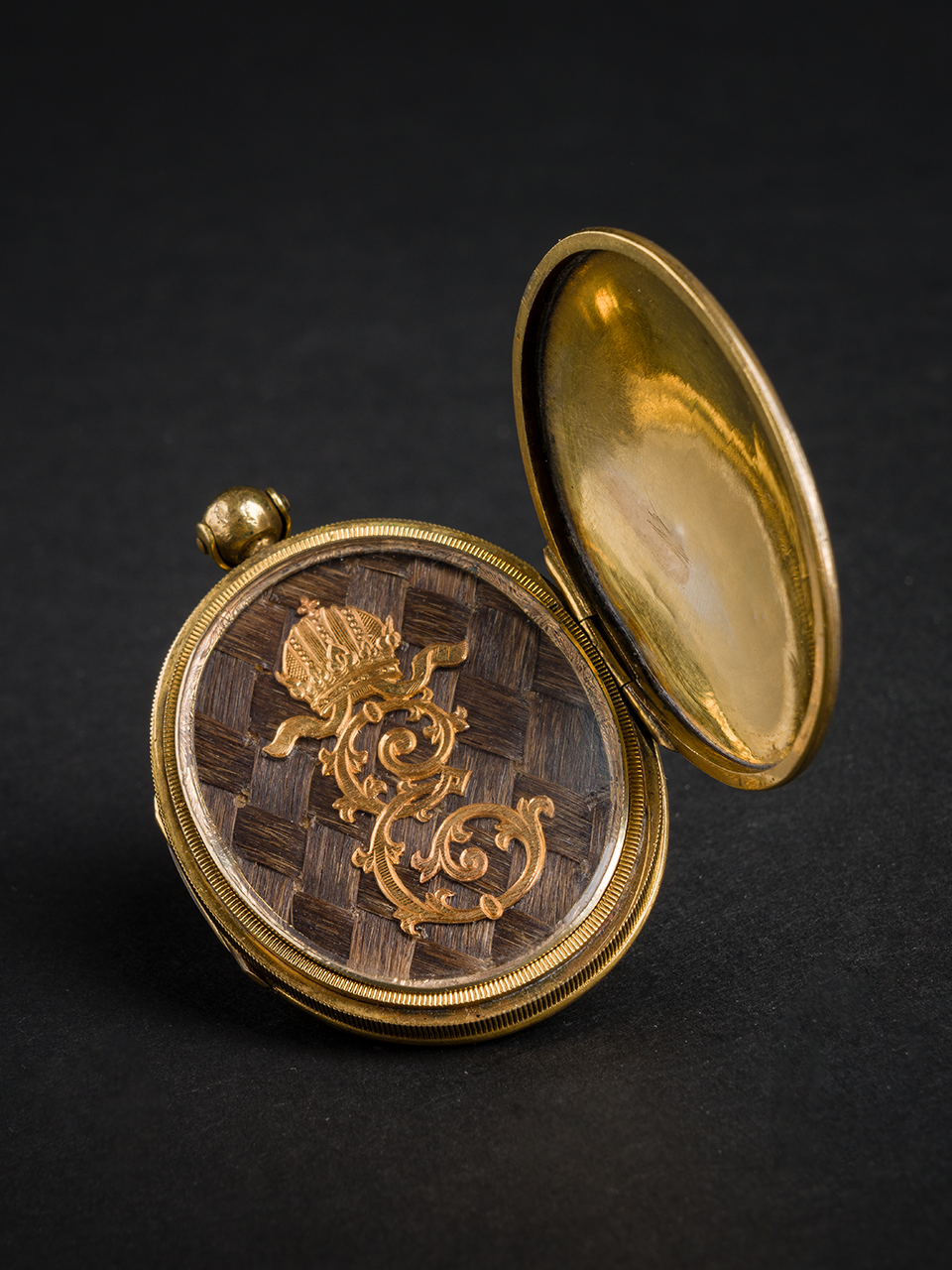 The wide range of edged weapons also attracted a great deal of attention. A superb shashka M 1910 for officers of the Cossacks (lot 3188) raced past its estimate of 10,000 euros before the sale of the rare model was eventually completed at 28,750 euros. Quite a few King Ludwig aficionados were hoping Christmas would come early, resulting in a barrage of bids for lot 3291. The exquisite presentation pin belonging to the controversial monarch was originally listed at 3,500 euros. The diamond-studded gold piece now takes pride of place in a new collection for 18,125 euros. The uniqueness and extreme rarity of lot 3470 certainly fired bidders' enthusiasm. Closing at 30,000 euros, the helmet for officers in the General Staff of the Royal Saxon Army helmet almost quintupled its reserve of 6,800 euros. Next up, a remarkable document of incomparable historical significance enticed an avalanche of bids. The aide mémoire dated 4 August 1914, lot number 3490 – a vivid account of the frantic, tumultuous events on the eve of the outbreak of World War I – inspired such fervour that the price soared from 4,000 euros to 37,500 euros. 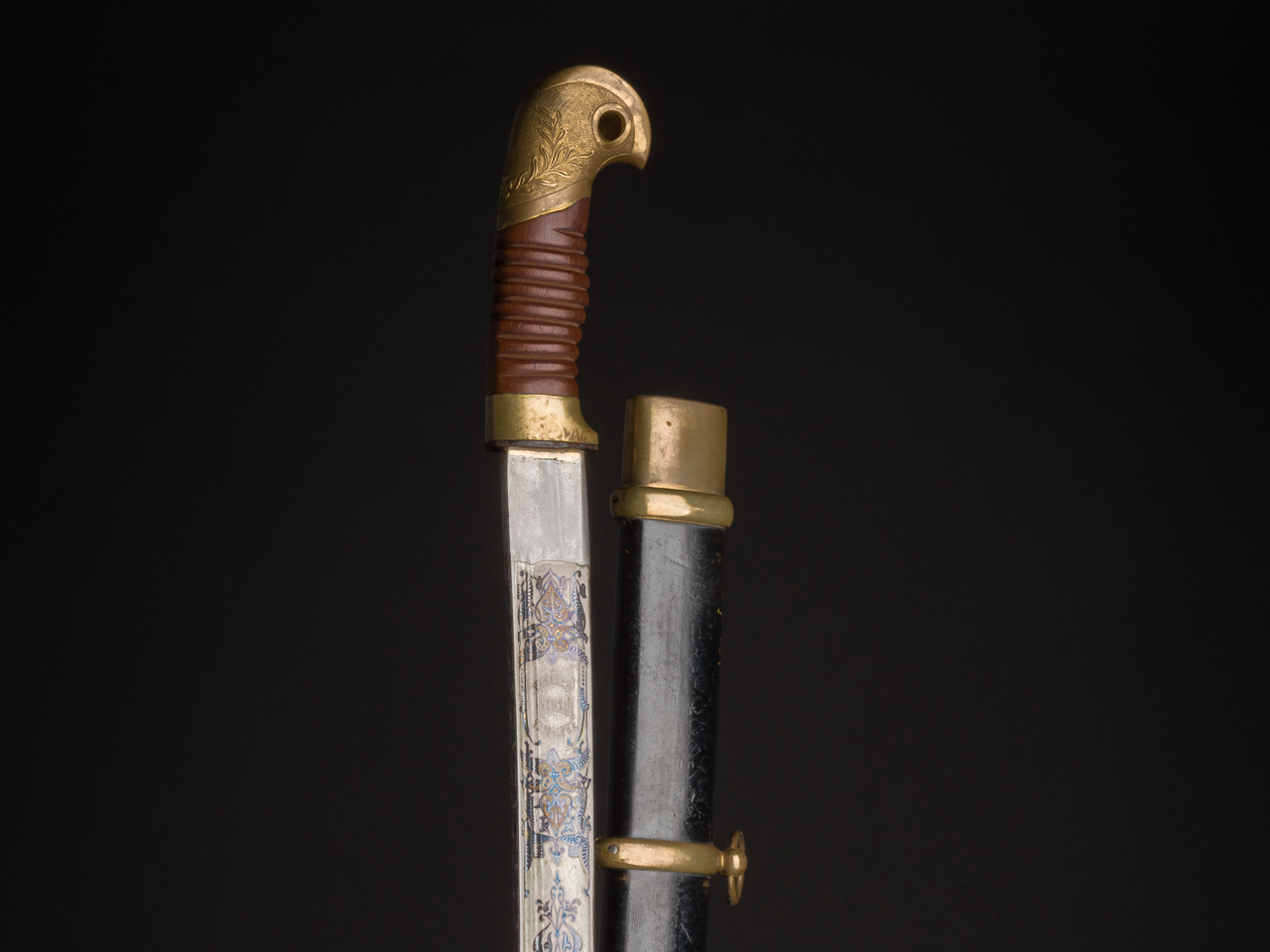 On Friday, 26 November, over 930 items of the catalogue “Orders and Military Collectibles from 1919 onwards” came under the hammer. Most buyers were probably aware that it was going to be a long day. But nobody would have guessed that the auction would go on until just before midnight. This was due solely to the keen participation of the audience. Virtually every object found a new owner.

Buyers were also unable to resist the over 40 objects belonging to Leni Riefenstahl, probably Germany's most controversial filmmaker, with every last one achieving high figures. Opening at 250 euros, lot number 4634, two art prints, went on to fetch 1,187.50 euros, while three champagne glasses from her personal table service were acquired for 900 euros (lot 4659). Lastly, her ski suit, lot number 4669, now delights another enthusiast for 6,000 euros, fifteen times its asking price of 400 euros. 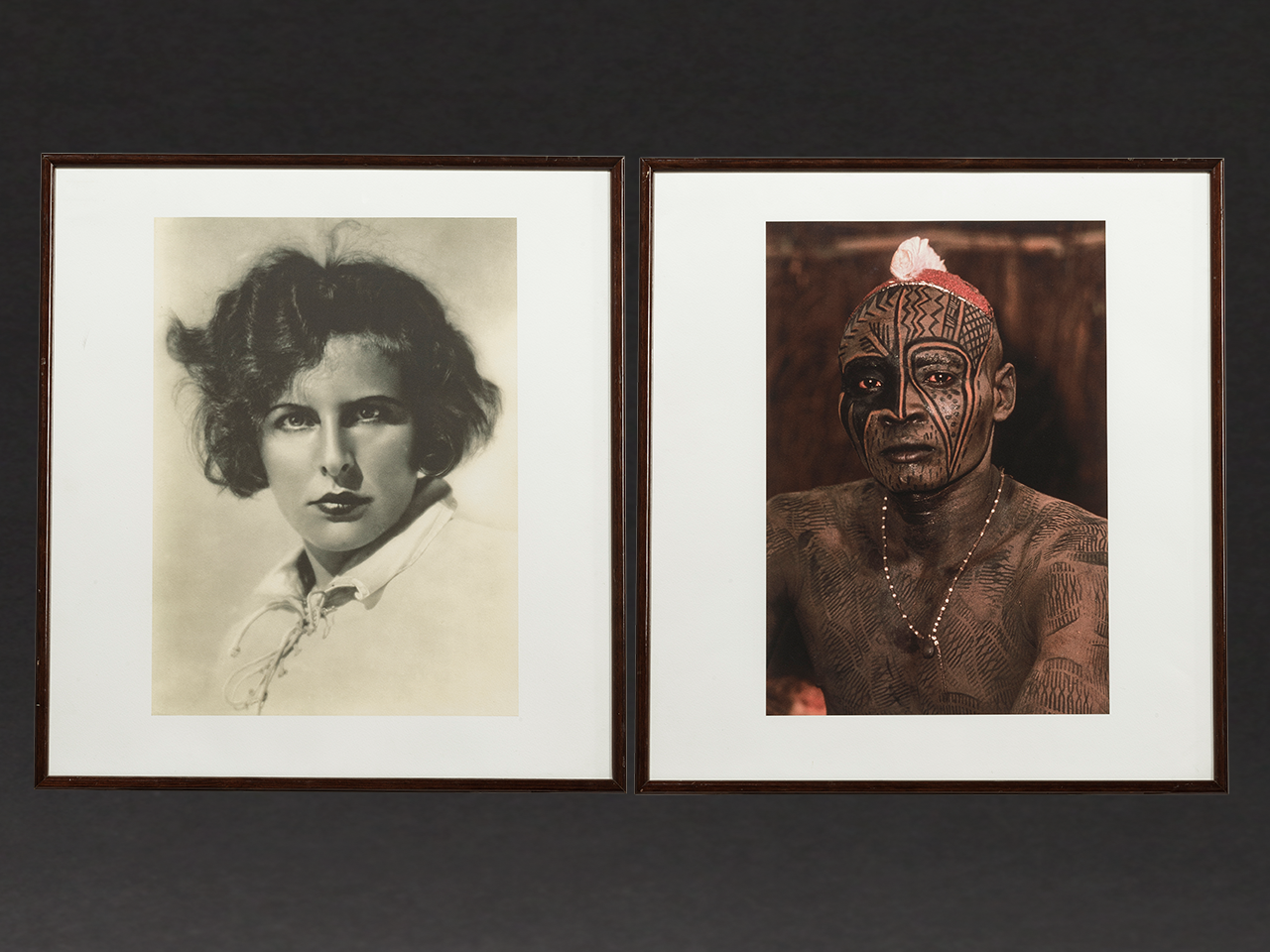 A large collection of objects from the estate of Major Emil Fey, bearer of the Military Order of Maria Theresa, Security Minister and Vice-Chancellor of the First Austrian Republic under Chancellor Dollfuß, was equally successful – all 24 objects changed hands for many times their catalogue price. Among the top lots was 4730, two metal honorary citizenship certificates mounted on a wooden support: offered for 300 euros, the winning bid was 1,500 euros. Moreover, lot number 4738, documents and portrait photographs of this World War I hero achieved over twenty-four times their limit, costing their new owner 9,750 euros. A mixed lot of 100 photographs was valued at 300 euros, yet the hammer only fell at 4,000 euros. 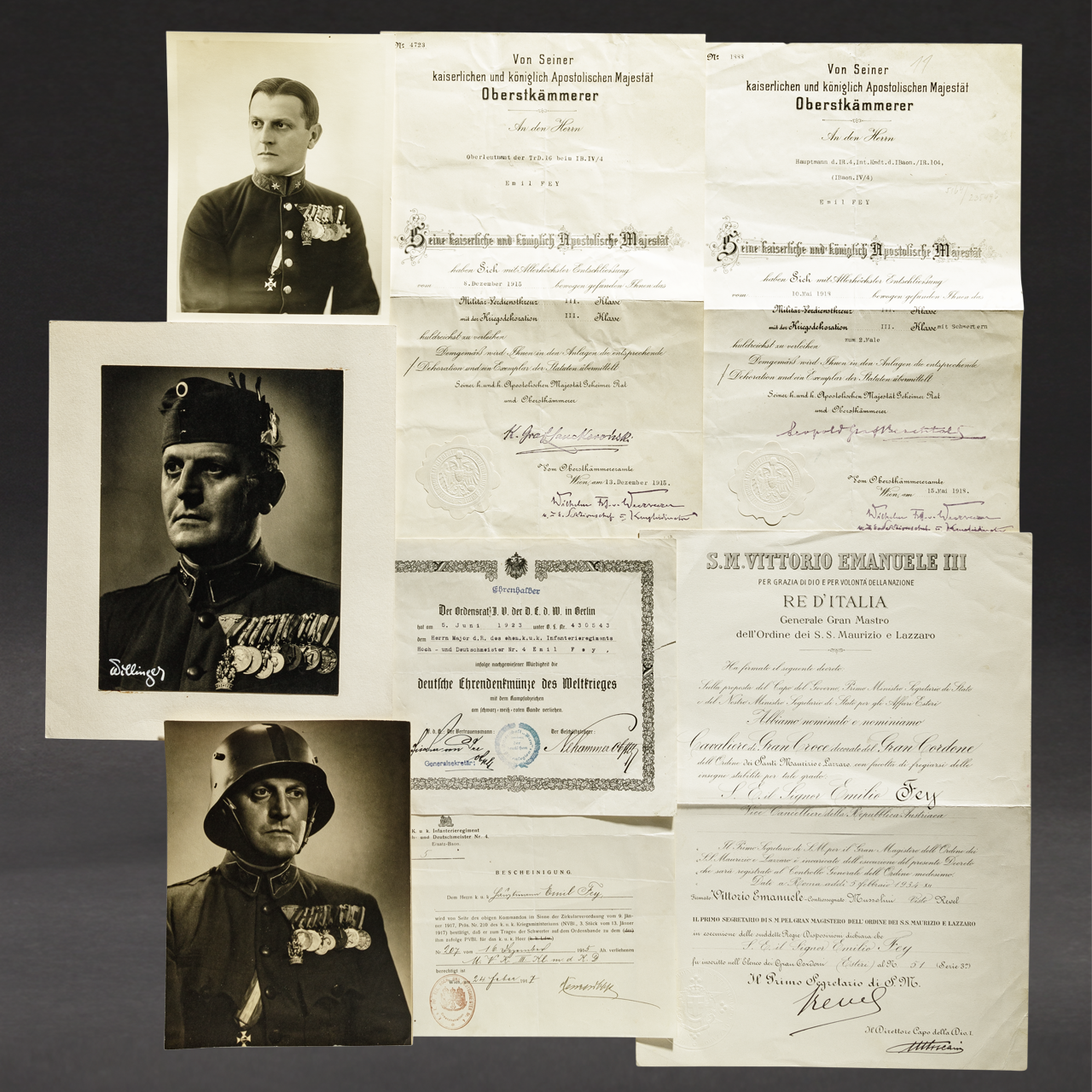 The next, undeniable sensation that same day was the unparalleled collection on Collaboration in the Netherlands. Due to its large size, only the first of three parts of this collection was offered for auction. Focusing on the National Socialist Movement NSB (Nationaal-Socialistische Beweging) and related organisations such as the NJS (Nationale Jeugdstorm) and WA (Weerafdelingen), just one of the 165 lots remained unsold, while many others surpassed their minimum bid many times over. Lot 4768, a memorial plaque for a K.I.A. member of Nationale Jeugdstorm is worthy of special mention. Featuring a memorial inscription and an NJS emblem, bids from 1,000 euros were welcome for the plaque, which subsequently fetched 9,750 euros. Meanwhile, an examination book of the utmost rarity (lot number 4770) coaxed one aficionado to part with 13,125 euros, thereby dwarfing its asking price of 1,200 euros. A 1941 poster calling for Dutch volunteers to join the Waffen SS "Alles sal reg kom", lot number 4879, was snapped up for 5,250 euros, with blatant disregard for its estimate of 800 euros. In addition, four promotional catalogues for edged weapons, grouped for 150 euros as lot number 4924, kept the audience on tenterhooks until the pleasing final result of 2,625 euros. Part two of this collection will come under the hammer in the next live auction of Hermann Historica in Spring 2022.

The post-auction sales to our autumn auction will run all the way through December 23, 2021. Until then you can purchase all unsold lots at the starting price plus the buyers premium.