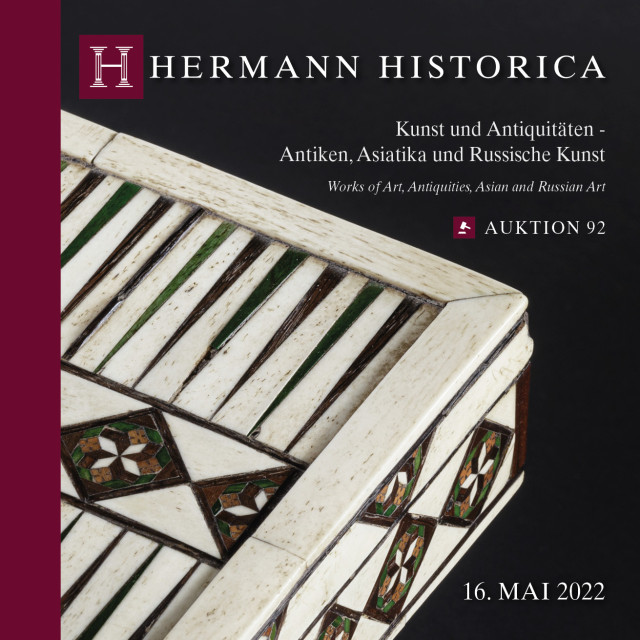 Our catalogue "Works of Art, Antiquities, Asian and Russian Art" includes 891 lots. The descriptions are in German, with English translations of objects above a certain threshold. The high-quality thread-bound catalogue on high-gloss paper has the format 22 x 22 cm and shows each item in at least one colour photograph. Since our printshop could not guarantee timely delivery of hardcover catalogues, we opted for softcover to make sure that catalogues would arrive well ahead of the auction - and not afterwards.

Once again this spring, the "Art and antiques" chapter presents an abundant selection of diverse objets d'art spanning a wide variety of categories, periods and countries. The catalogue opens with antiquities, among them a number of exceptional prizes. Worthy of special mention are a multi-piece silver candelabra of superb quality and phenomenal rarity, dating between the 1st century B.C. to the 1st century A.D. (lot 50), a Roman bronze urn with particularly graceful lines, inscribed with a profound epigram in sophisticated calligraphy (lot 59), and an enormous grave hydria from the 4th century B.C., which is painted with an intricate naiskos scene (lot 41).

This auction offers collectors yet another opportunity to acquire several magnificent Chinese ceramics, among them lot 158, a monumental famille rose vase with 'hundred deer' décor from the late Qing dynasty or the early Republic period. Stamped with the six-character mark of the Kangxi period, a blue and white glazed brush pot embodies the tradition in Chinese culture of stylised characters, and the artistic writing thereof, in exemplary fashion with its skilfully executed lettering (lot 129).

Moreover, we are showcasing our customary wide range of fabulous objects in the works of art section. A great many fine Kunstkammer objects are illustrated on the pages of the catalogue, while the cover features an awe-inspiring games compendium made by the Italian Embriachi workshop. The lid of the ivory casket, embellished with delicate wood inlays, is designed to play backgammon and there is a chessboard on the underside (lot 405). The panels of a prodigious ivory tankard sport an intricately carved, antique-style scene in high relief, depicting a satyr surrounded by graces. This splendid work was produced circa 1880 (lot 400). Next up is a veritable curiosity: a gentleman's walking stick with an integrated camera, after a design by Ben Kronke. These items were manufactured circa 1903 by Lehmann of Berlin (lot 431). The workmanship of an Augsburg casket with three coats of arms, enamelled in colour and highlighted in gold, is breathtaking. The casket shows the coats of arms of the Principality of Anhalt, the Margraviate of Brandenburg and the Duchy of Württemberg. However, the interior is no less skilfully wrought. Not only is the box lined in exquisite paper with gold foliage, but the gilt iron lock is lavishly decorated with tendrils. The 17th century casket is listed in the catalogue as lot number 410.

One highlight among the silverware is a Gothic communion chalice, probably dating from the 15th century (lot 473). An Augsburg lidded tankard made circa 1678/79 by the master craftsman Friedrich I Schwestermüller (lot 478) proclaims the four cardinal virtues of justice (iustitia), fortitude (fortitudo), prudence (sapientia) and temperance (temperantia). A silver goblet with a gold bowl by court goldsmith Theodor Heiden of Munich has an impressively sumptuous air, its shaft and the base of the bowl magnificently crafted. However, the crowning glory of the goblet is the 18-carat gold bowl (lot 497).

Furthermore, we would like to draw your attention to several noteworthy pieces among the sculptures and statues for sale, such as a large pair of Carinthian shrine guardians, dating from circa 1510/1520. St Florian and St George are depicted wearing Gothic armour, displaying their attributes (the former extinguishing a burning house with a bucket of water, the latter with a lance and slain dragon) (lot 322). Next up, a Romanesque figure of Christ has an interesting provenance, having originally been part of the private collection of the writer Charles Henri Dewisme (Henri Vernes). The figure was forged in fire-gilt copper circa 1300 (lot 320).

Collectors of objects in iron and base metals will certainly find rich pickings in this catalogue, from a bronze Gothic stag candleholder dating back to circa 1400 (lot 581) to a striking, late Gothic, early 16th century offertory box (lot 584) and a small Renaissance war chest, circa 1550 (lot 597).

In addition, approximately 230 icons and Russian artworks are being offered for auction in this art catalogue. Particularly worthy of note here is a small, silver Carl Fabergé vesta or match case. The back of the case is embellished with turquoise enamel on enamel with a wavy guilloche pattern, while the front is lavishly studded with diamonds (lot 659). Bids are also invited for a large, partially gilt silverware confectionery bowl from the silver dinner service presented to Grand Duchess Olga Nikolaevna Romanova (1822 - 1892) on her 18th birthday, lot number 682. A Menaion icon stands head and shoulders above the rest. It shows the twelve months of the year across four registers and 90 devotional images of the Virgin Mary (lot 814). 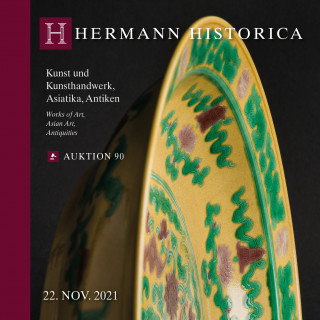 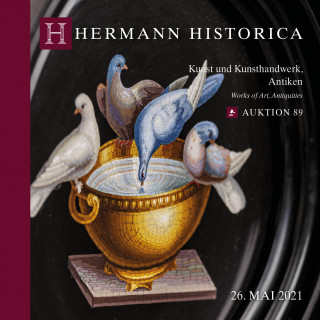 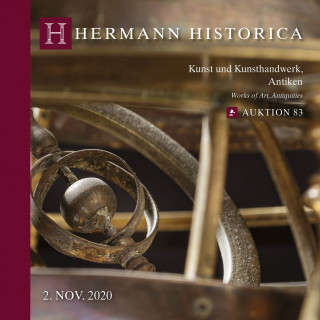 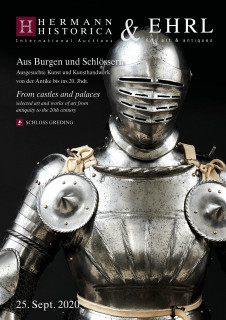 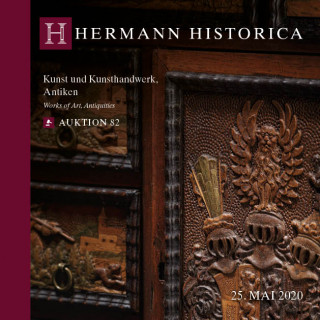