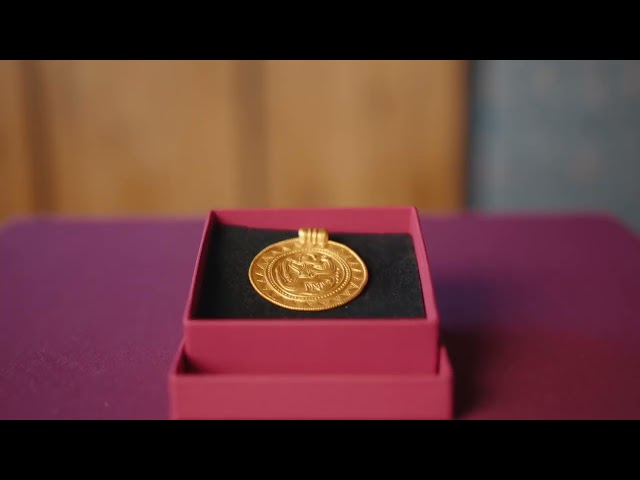 Migration-period bracteate of the B type. In the centre a "running" figure from the side. The details are chased into the gold plate from behind with a model. One leg facing forward with the lower leg bent backwards. In the space between the legs a sequence of four runes: "l,a,th,u". "Lathu" probably means "invitation" in the sense of "evocation". The other leg stretched backwards and the lower leg bent upwards. The upper body leans forward. One arm pointing upwards, with the forearm bent downwards, the thumb clearly splayed out. The other arm slightly bent downwards with the forearm pointing upwards, the thumb of the hand held in front of the mouth again spread. The mouth open, vertical lines under the chin, probably representing a beard. Nose and eye clearly marked. Hair flowing backwards in a slight curve on the head. Three markings in the field: under the back hand three dots, between the front upper arm and thigh a circular eye, in front of the front elbow and knee a zigzag line with a dot at the upper end (strongly stylised animal?). This image in the centre field surrounded by a double line with an inner circle of pearls, also chased from behind. This is followed by a wreath of punched triangles with a raised line and raised dot in the centre within a depression. This decoration struck from above with a punch. The rim bordered by a soldered notched wire. A horizontally soldered cylindrical eyelet with a profile at the top: a wide bead on the outside and two narrow beads in the centre. The notched wire slightly worn on the sides and sharper in profile immediately in front of the eyelet. The edges of the eyelet mouths show slight signs of wear on both sides at the top. The left edge of the eyelet somewhat dented, two small cracks on the edge of the central beads on the back of the eyelet. Otherwise impeccable, excellent condition with only minimal waving of the bracteate, which is hardly noticeable visually when viewed from above.
Despite intensive research, the interpretation of the bracteates from the Migration Period remains puzzling in many respects, partly due to the lack of written sources from this period. However, the overall habitus of the figure looks like a runner who has literally started to "sprint" and holds one palm in front of his mouth, which emits a shout. An authoritative interpretation, however, is not readily possible. The runic inscription is also known in this form from other gold bracteates of the same period. The bracteate clearly belongs to the rarer B-type, but does not fit exactly into one of the previously named or known form families of B-bracteates. However, there are clear references to details of the B2, B3 and B4 form families. A too schematic classification of the gold bracteates of the Migration Period is difficult anyway. Besides numerous "associated pieces" and "bastard forms" to the previously named form families of the bracteate types A, B, C, D and F, new variants can always appear. A very attractive example of a Germanic gold bracteate of the Migration Period, especially of a rare type in contrast to the much more common C-bracteates. Diameter without eyelet 4.3 mm, with eyelet 4.7 cm.

Provenance: South German private collection, taken over from the collection of the father.

Condition: I - Questions about the lot?