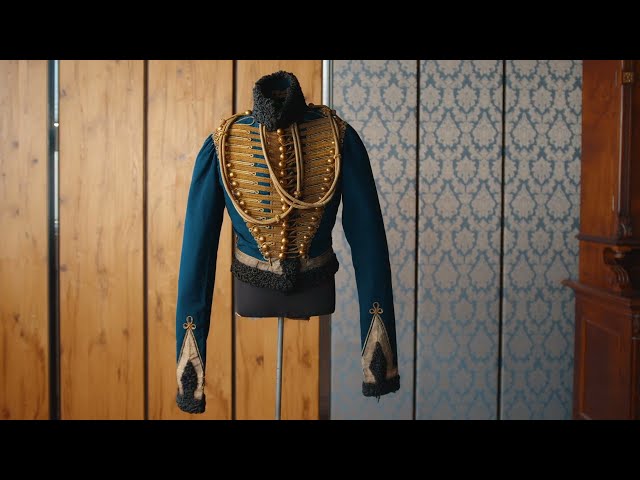 Blue woollen cloth with lavishly gilt lacing and gilt non-ferrous metal buttons with the regiment number "12", trimmed in black sheepskin (renewed). A gold cord with slider and star of rank plus a shoulder button ("12") on both shoulders. A double round gold cord with sliders and pin extending from both points of the collar. Blue silky lining (losses to the fabric, somewhat stained). Expertly restored, slightly damaged in places, signs of wear and age. Distinguished, early Russian pelisse.
In all likelihood, part of the British booty, documented in literature: the carriages transporting luggage belonging to officers of the 12th Hussars were ambushed by British forces on 24 September 1854 as the Russian troops were withdrawing following the Battle of the Alma after Sevastopol. A detailed description of the event can be found in the record of 24 September 1854 in Volume 2 of the "Istoria 3-go dragunskago Ingermanlandskago polka 1704-1904", by V. I. Genishta and A. T. Borisevich, St. Petersburg 1904-1906. Link to the English translation: http://www.marksrussianmilitaryhistory.info/Inger-html.htm. An extract from the literature, relating the provenance from the British perspective, is enclosed ("The Story of a Soldier's Life" by John Alexander Ewart, Vol. 1, London 1881, p. 245). See also page 193 in "The War: from the Landing at Gallipoli to the Death of Lord Raglan" by W.H. Russell, London, 1905.
The 12th Hussars fought in the Battle of Balaclava and attacked the 93rd Sutherland Highlanders, the "Thin Red Line".

Condition: II Questions about the lot?