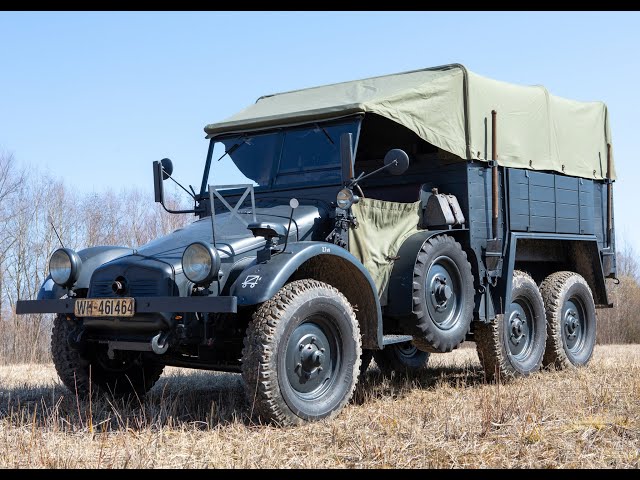 All-terrain, six-wheel truck and artillery tractor with rear-wheel drive (6 x 4) in the configuration L 2 H 143 = truck with a payload of (2) tons, backbone frame in the (1)st modification with a (4) cylinder engine and (3) axles. Manufactured in 1941 with the 3.5 l four-cylinder boxer engine (petrol), type Krupp M 304 in the 60 horsepower version, as built from 1936 to 1942. The extremely reliable M30x type engines were also used in the Panzer 1. This Protze version features elements of both a Kfz. 70 and a Kfz. 81. On one hand it is designed as a personnel carrier (Kfz. 70) and thus equipped for the motorised machine-gun group of a rifle company, i.e. an MG 34 support mounted on the panel behind the driver, including a replica MG 34 (an all-metal model, not a deactivated firearm), an air defence carriage for an MG 34 or 42 with a double threaded mount on the floor of the passenger compartment and numerous MG ammunition boxes, containers for exchangeable barrels and three 98k mounts including three 98k rifles (models, not weapons) in the rear of the vehicle. On the other hand the truck features additional storage compartments for anti-aircraft gun accessories, as typically seen on a Kfz. 81. The Protze was professionally restored several decades ago with a very good basis and almost all original metal parts, adding the tactical markings of the "Großdeutschland" division. The convertible top was reconstructed by a saddler according to the original designs and custom-made for the vehicle in matching materials with metal rings, leather flaps and transparent windows. Preparations have been made to approve the vehicle for use on German roads. This kind of truck in such an excellent, roadworthy condition is absolutely unique!

Condition: II Questions about the lot?